Vicky Kaushal Confessed To Be 'husband Material' Way Back In 2018; Watch Viral Video

A video of Vicky Kaushal calling himself "Husband Material" is currently making the rounds on his fan pages. This video was a clip from 2018's Toronto Festival

An old video of Vicky Kaushal is now making the rounds on social media. This adorable and hilarious video was shared on a Vicky Kaushal fan page about a week ago, but fans cannot stop gushing about it and are still commenting on the video. The video has gone viral thanks to a hilarious moment when actor Vicky Kaushal called himself "husband material".

Vicky Kaushal agrees that he is "husband material"

The above video is from a 2018 panel at Toronto. That year, Vicky Kaushal's film Manmarziyaan was making its premiere at the Toronto International Film Festival. Alongside Vicky Kaushal, the panel also featured Taapsee Pannu, Abhishek Bachchan, and the director, Anurag Kashyap.

When a fan claimed that she loved him, Vicky Kaushal was flattered and he thanked her profusely. He then hilariously quipped that he was a "husband material". After Vicky Kaushal called himself "husband material", fans at the Toronto Festival could not stop cheering for him. Now, his online followers have shared a clip of this hilarious incident on social media. Many fans were amused by the 'confession' made at a time when he was reportedly single.

Even Abhishek Bachchan joins in on the fun 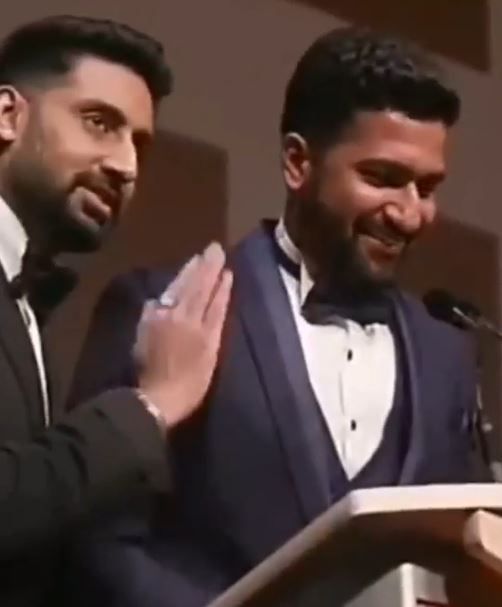 After Vicky Kaushal said his adorable "husband material" line, Abhishek Bachchan showed up on the screen and patted Vicky on the back. He even asked the audience at the Toronto Film Festival to give Vicky Kaushal their "ashirwad". After that, Vicky Kaushal took the stage to thank his fans for loving him and supporting his work.

In a recent interview with an entertainment portal, Vicky Kaushal was asked about his rumoured relationship with Katrina Kaif. However, Vicky Kaushal adamantly refused to comment on his personal life, saying that he really wanted to guard his personal life to some extent. He claimed that if he opened up, it would lead to discussions, interpretations, and misinterpretations, which was something he did not want.

[Above Image and Promo Image from Vicky Kaushal Instagram]