Vicky Kaushal recently took to his Instagram stories and shared a scene from 'Joker' which he deems 'one of the best in cinema'. Check it out below-

Vicky Kaushal, on various public occasions, has often discussed his love for cinema. The actor can be often seen indulging in conversations around world cinema and hasn't shied away from admitting that he has keenly followed the work of various different actors working in the entertainment fraternity. Now, Vicky Kaushal took to his Instagram stories and shared a scene which is one of his favourites. Check it out below-

Vicky Kaushal's 'one of the best' scenes 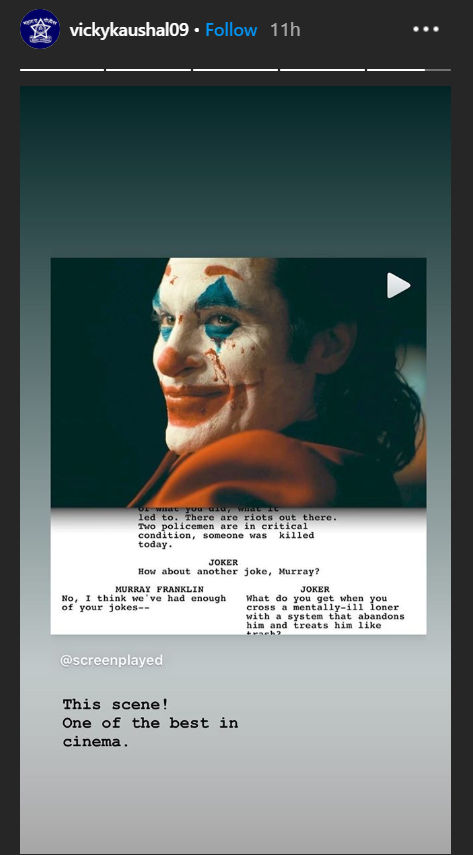 Vicky Kaushal took to his Instagram stories and posted a scene from the film Joker from 2019 which featured Joaquin Phoenix as the central character. The scene from Joker where the titular character kills a talk-show host during a live taping. Vicky Kaushal wrote. 'This scene! One of the best in cinema'. The specific post shared by Vicky Kaushal contained a screenplay to screen comparison of the scene which showcased how the sequence was written on paper. Check it out below -

On the other hand, Vicky Kaushal recently celebrated the two-year anniversary of his film Raazi in which he starred alongside Alia Bhatt. The actor shared a heartfelt post on his Instagram where he shared a photo of his character from the film. In the caption, he thanked director Meghna Gulzar and producer Vicky Kaushal for making him a part of the film. Check it out below -

Vicky Kaushal recently starred in a horror film titled Bhoot - The Haunted Ship which had an average run at the box office. He will be next seen in the film Sardar Udham which is being helmed by director Shoojit Sircar. The film will be based on the life of Sardar Udham Singh and is expected to hit the silver screen on January 15, 2021.

Also read: Vicky Kaushal's 'Masaan' and other Bollywood films that were shot in Varanasi