Vicky Kaushal recently shared a splendid throwback picture that is completely unmissable. He also goes on to share a throwback message. Read here to know more.

Amid the lockdown, many celebrities have been entertaining their fans by posting several pictures and videos on their social media handle. Among the many celebs, Vicky Kaushal has also been quite active on social media giving fans a glimpse of his life under lockdown. The actor recently shared a splendid throwback picture that is unmissable.

Vicky Kaushal recently took to Instagram to share a throwback picture of him horse riding. In the picture, he can be sitting on a horse wearing a black zipper, dark coloured chinos, a pair of black shoes, a helmet, and a riding crop. He sure looks suave, even as he gives this candid pose.

Seeing this picture, fans could not stop themselves from commenting. Fans went on to praise the picture with several happy comments and likes. Some of them wrote, “Handsome as always,” “uff, can’t get over this picture,” “love this picture,” and many more. Check out a few more comments below. 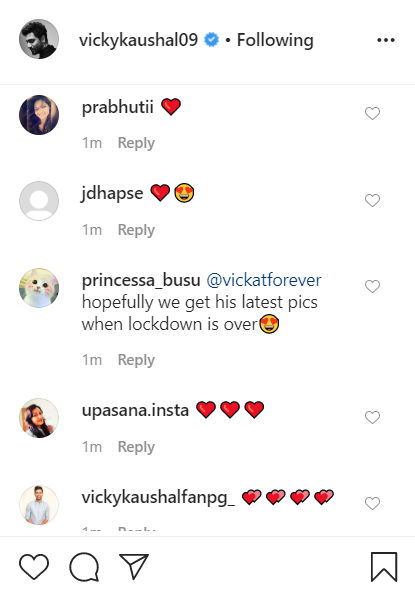 Apart from this picture, the actor has also been several posts keeping his fans entertained. The actor is currently spending time with his loved ones at his Mumbai home. Vicky Kaushal has been sharing throwback posts, quirky posts and also giving glimpses of what he does during the day.

Vicky Kaushal recently shared a post of himself where he resembled so much like the legendary comedian Charlie Chaplin. The post that he shared was painting by one of his fans. The remarkable picture garnered heaps of praises from his fans and netizens. Check out the post below.

Vicky Kaushal will next be seen in the biopic of Sam Manekshaw, who was the Chief of the Army Staff of the Indian Army during the Indo-Pakistani War in the year 1971. The film is being helmed by Meghna Gulzar and also stars Manoj Bajpayee in a lead role.  Post that he will also be seen in Aditya Dhar’s The Immortal Ashwatthama and will also be a part of the period drama film Takht that is a multi starrer film.

PEOPLE HAVE PLEDGED SO FAR
LATEST NEWS
View all
7 hours ago
Unseen Pic of the Day: Baby Deepika is all smiles in her mother's arms
4 hours ago
Hardik & Natasa announce pregnancy, Sonu Sood called 'Indian of the Year' & more
6 hours ago
Esha Gupta deletes all her Instagram posts but keeps one, Read details here
7 hours ago
Ranveer Singh's comment on Kareena's 'kaftan' post shows he is a 'Bebo' fan for life; Read
6 hours ago
'Man isn't a season, yet he changes': Anupam Kher ponders over the nature of change; Watch