Vicky Kaushal, who shot to prominence post the success of URI: The Surgical Strike, is currently on an unstoppable success streak. The actor has many interesting releases lined up this year. Apart from being known for his stellar onscreen performances, Vicky Kaushal also has a big social media presence. The actor often keeps his fans updated with his pictures and work announcements on social media. Recently, Vicky Kaushal shared an unmissable picture on social media, to which MC Sher aka Siddhant Chaturvedi had an interesting comment. Here are the details.

Recently, Vicky Kaushal took to his official Instagram handle to share a priceless picture, in which the actor can be seen posing with a cat, as he flaunts his serious look. In the picture, Kaushal can be seen in a white tee with blue-printed patches, which is accessorised with a pair of sweat-pants and white sneaker shoes. He captioned the picture with: "attitude toh aise de Raha hu Jaise sher ke Saath baitha hu. 🤷🏼‍♂️” (sic). Take a look:

Soon after the picture was posted online, fans and celebrities made hillarious comments on the picture. Among the celebrities who commented on Vicky’s picture was Siddhant Chaturvedi, who wrote “Bhai Aao Kabhi baith-te hain Chai pe 😉”. Take a look: 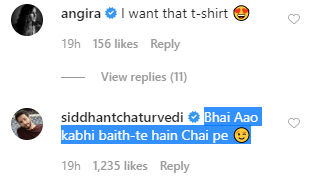 Meanwhile, Vicky is currently having a packed schedule, as the actor has a slew of releases lined up in the coming year. He will be seen along with Bhumi Pednekar, Kareena Kapoor Khan and Ranveer Singh in the upcoming period-drama, Takht. Kaushal will also be seen in the upcoming war-drama, Manekshaw. Directed by Meghna Gulzar, the movie is based on the life of the army veteran, Sam Manekshaw. Reportedly, Vicky has been roped in for the Anees Bazmee directorial, ShaRaRaRa along with Sara Ali Khan.

PEOPLE HAVE PLEDGED SO FAR
Vicky Kaushal starrer 'Sardar Udham Singh' to release on January 15, 2021
Be it traditional or casual wear, Vicky Kaushal loves to flaunt his blue outfits; see pics
Watch: Anupam Kher hopes 'for change in humans', assures good times will come
Kareena Kapoor reveals how she felt about 'nasty' rumours about her and Hrithik; Read
'This could be a potential bio-war', says Kangana Ranaut as she talks about coronavirus
Internet filled with nostalgia as 'Ramayan' & 'Mahabharat' make return on TV amid lockdown
There is constant learning and unlearning for actors: Manisha Koirala
DO NOT MISS
GAUTAM GAMBHIR SLAMS KEJRIWAL
YOGI ADITYANATH ON COVID-19
HEALTH ADVISORY ISSUED FOR ELDERLY
'SHAKTIMAAN' SEQUEL IN THE WORKS
TWO ARMY OFFICERS TEST POSITIVE
GERMAN MINISTER COMMITS SUICIDE