Vidyut Jammwal took to social media and shared the video of a mind training exercise for speed through his official Instagram handle. Check out:

Bollywood actor Vidyut Jammwal treats his fans with workout videos on different platforms. Recently, he took to social media and shared a clip of himself while doing a mind training exercise for speed. The actor has used a tennis ball for the same. He is seen throwing it upwards and punching as many times as he can before catching the prop. Check out Vidyut Jammwal’s recent video on the video-sharing platform.

Vidyut Jammwal took to Instagram and shared a video of himself while doing a mind training exercise through his official handle on October 15, 2020, Thursday. It features the actor working out in an outdoor location. He is visible throwing a ball before punching continuously in the air. After he catches it, Jammwal repeats the process.

Meanwhile, Vidyut Jammwal posted its longer version of 1:40 on his official YouTube channel. In the description, he has mentioned, “Speed is defined as the ability to move the body in one direction as fast as possible. Speed training puts your muscles through a fuller range of motion, improving flexibility. It trains more muscles, leading to better muscle balance. Try out Vidyut's method for training your mind for Speed. No special equipment needed. A tennis ball will do just fine.”

Also read: Akshay Kumar Visits Gurudwara In Glasgow; Fans Swamp Him For Pictures Outside The Hotel

Within a couple of hours of sharing the social media post, Vidyut Jammwal received more than 4,05,000 views and over 935 comments on the video-sharing platform. Numerous fans and followers of the star applauded the actor for his mind training exercise. Many among them took to the comment section and expressed themselves through a series of emoticons such as hearts, fire, heart-eyed smileys, kisses, hugs, claps, folded-hands, and thumbs up, to name a few. Check out some of the responses to Vidyut Jammwal’s video on Instagram: 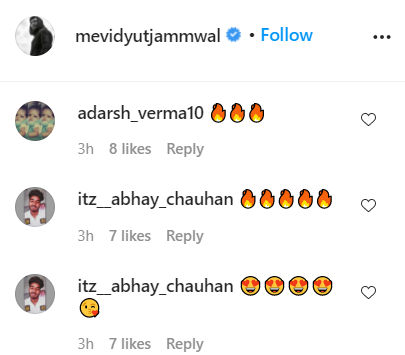 WE RECOMMEND
2 weeks ago
Vidyut Jammwal shares 'Happy Memories' of Khuda Haafiz, fans exclaim 'Best Action Hero'
3 weeks ago
Fans call Vidyut Jammwal an 'inspiration' as he releases a new fitness video; watch
1 week ago
Lootcase's release on television announced on social media, to premiere this month
3 months ago
Vidyut Jammwal's net worth shows how he made it big in Bollywood despite being an outsider
1 month ago
Vidyut Jammwal reveals he 'just started seeing someone', says he 'really likes' her