In her caption, Yami Gautam called Vikrant Massey ‘90s Ka raja’ (the king of the 90s). Soon after Yami posted the picture on Instagram, fans of the actor rushed to the comment section and showered praises on the duo for exhibiting their ‘crazy’ dance moves. Some fans also lauded Vikrant’s performance in the video. Take a look at how fans reacted to the video shared.

Also Read | 'Into The Labyrinth' 2019 Explained: What Is The Plot Of Donato Carrisi's Thriller? 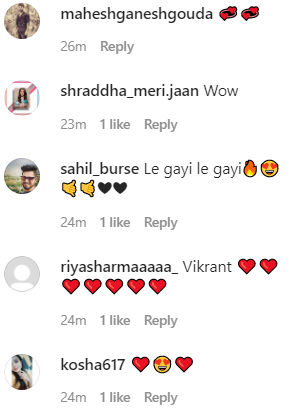 Yami recently took to her Instagram to express her heartfelt gratitude towards her Ginny Weds Sunny team. The actor shared a BTS video from the sets of Lol song, which features Yami Gautam readying up, while her team can be seen helping her by holding a compact mirror and an umbrella. Watch the video here:

Thank you for all the love for #LOL ðŸ’• #13M This film has been toughest for me for health reasons,,, no song shoot in #GINNYwedsSUNNY went without giddiness & feeling weak but it’s my constant support system which kept me going strong & made sure I never feel low even for a fraction of a second. Big hug to @neverendingdrama @amandeepkaur87 @hairgaragebynatasha @imahimaagarwal #Ram #Shivraj #Nayan #Ravi ! #forevergratitudeðŸŒ¹â¤ï¸

Yami- on the work front:

The actor was much appreciated for her performance in the film, Uri: The Surgical Strike. Starring Yami and Vicky Kaushal in the lead roles, the movie also stars actors like Mohit Raina, Paresh Rawal and Kirti Kulhari in prominent roles.

Also Read | 'Into The Labyrinth' 2019 Explained: What Is The Plot Of Donato Carrisi's Thriller?

WE RECOMMEND
1 week ago
Twinkle Khanna's Tweak India shares a list of 15 books about strong women
1 week ago
'Into the Labyrinth' 2019 explained: What is the plot of Donato Carrisi's thriller?
1 week ago
Take cues from Yami Gautam on how to make authentic Thai green tea
1 week ago
Vikrant Massey and Yami Gautam's on-screen chemistry is unmissable in 'Rubaru'
4 weeks ago
Yami Gautam lauds her team for being 'constant support systems' on 'Ginny weds Sunny' sets