Ahead Of Its Release, Marvel Drops New Posters Of Angelina Jolie Starrer 'Eternals'

Ahead of Eternals' release, Marvel Studios has revealed the brand new character posters of the titular group of the Marvel Cinematic Universe's superheroes. 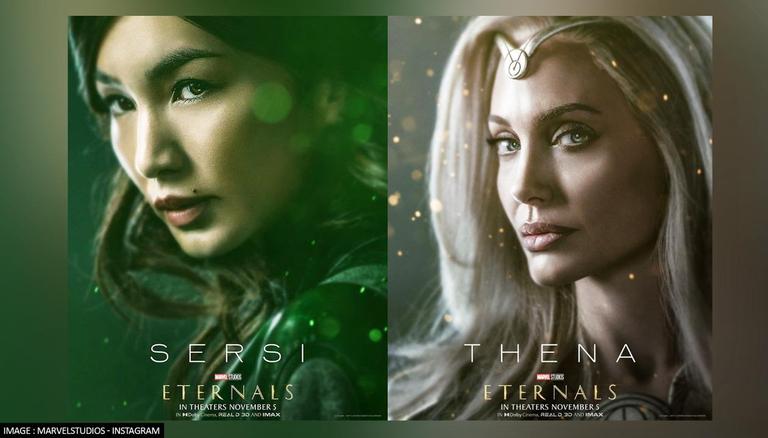 
Ahead of its release, Marvel has treated Eternals' fans with new character posters from the superhero film, which stars  Angelina Jolie, Gemma Chan, Richard Madden, Salma Hayek, and others. The latest posters reveal the whole new team of superheroes who have been on Earth for thousands of years, set to protect Earth from their evil counterparts, known as the Deviants.

The movie is helmed by Academy Award-winning filmmaker Chloé Zhao and marks the 26th film in the Marvel Cinematic Universe. The latest posters have been curated keeping in mind the colour scheme for each superhero, and give a closer look at their costumes and headgear. The movie's latest teaser clip named 'Change' has also revealed the Eternals' place in the MCU timeline. The film's events take off from Avengers: Endgame, where universal chaos ensues due to Thanos' finger snap reversal.

Marvel Studios' official Instagram handle uploaded the latest posters from the upcoming movie, including Angelina Jolie's look as Thena, as well as Richard Madden as Ikaris, Salma Hayek as Ajak among others. "Take a look at the brand new character posters for Marvel Studios’ @Eternals and experience the film only in theatres November 5", the caption read. Take a look.

The film's new trailer, titled 'Change' was recently released by the makers, which showcases Thanos’ reverse fingers snap that resulted in the emergence of new powers, which threaten to destroy the Earth. Apart from this, clips from the upcoming film's previous trailers have also been included. The clip establishes that the Eternals have come out to rescue Earth and support the Avengers after the events that took place in Endgame. One of the eye-grabbing scenes comes when Richard Madden’s Ikaris remarks "Eternals, assemble", a dialogue used in reference to the Avengers.

Produced by Marvel Studios and distributed by Walt Disney Studios Motion Pictures, Eternals is slated to hit the Indian and American theatres on November 5, 2021, as part of Phase Four of the MCU. Disney also announced that similar to its recent projects, the film will have a 45-day exclusive theatrical run, post which it will mark its premiere on a digital platform.