The People for Ethical Treatment of Animals (PETA) recently slammed Amul India for their tribute to Joaquin Phoenix in their latest Amul Topical. After Joaquin Phoenix won the Best Actor Award during the Oscars 2020, many took to the internet to pay tribute to the actor's great achievement.

Amul India also joined in by sharing their latest Amul Topical, where the iconic Amul girl smeared butter over the Actor's caricature while he held his Oscar Award. This image quickly drew the ire of PETA India and other animal rights activists, who took to social media to admonish the dairy company for their insensitive 'tribute', as Joaquin Phoenix is a vegan who never consumes dairy.

After Joaquin Phoenix won his Best Actor Award, the actor took the stage to give his acceptance speech. During the speech, Joaquin Phoenix also discussed animal rights and the cruelty of the dairy industry. The actor stated that he felt like people had become very disconnected from the natural world. He added that many humans were guilty of having an egocentric world view, and we believe that they are the centre of the universe.

Joaquin Phoenix then talked about the cruelty of the dairy industry, where people would separate calves from cows and steal their milk to sell commercially. However, despite Joaquin Phoenix's anti-dairy speech, Amul India decided to pay 'tribute' to the actor's Oscar win, by sharing a Topical where the Amul girl fed the actor butter. This immediately enraged PETA India, who called out Amul for their image.

Also Read | Birds of Prey will not feature Jared Leto's Joker due to THIS reason, says director Cathy 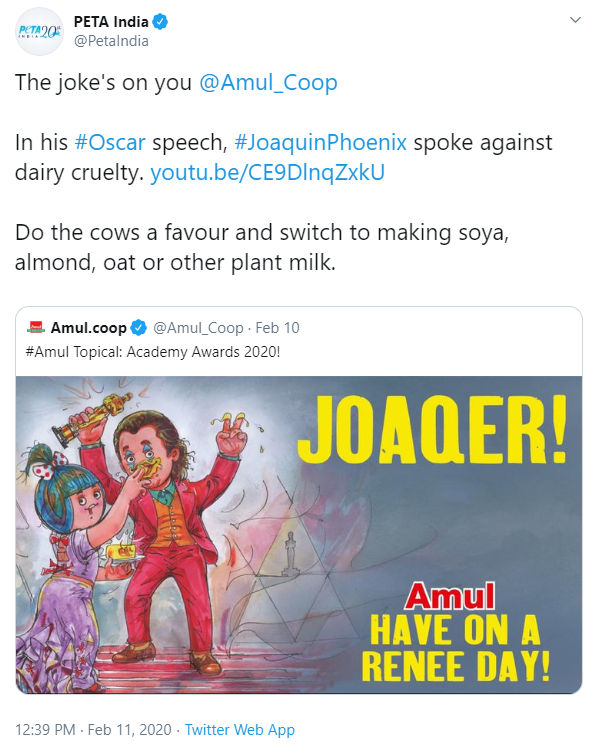 PETA India's Director of Celebrity and Public Relations, Sachin Bangera, also took to Twitter to slam Amul. He called out their insensitive Topical, reminding the Dairy Company that Joaquin Phoenix was a vegan and would never consume dairy. He also wished that Amul had done more research, informing them that Joaquin Phoenix's speech was about ditching dairy.

It's nonsensical @Amul_Coop! Wish you had done a little more research, or just heard #JoaquinPhoenix's Oscar speech. He's VEGAN! He DOES NOT consume dairy. His speech was about ditching dairy. #NotCoolAmul https://t.co/LT5aTZ8oA7