Azealia Banks Posts Video Of Her Dead Cat And Deletes It, Faces Backlash From Netizens

Azealia Banks seemingly boiled her dead cat; netizens criticize her for the same. Take a look at their reactions.

Singer and rapper Azealia Banks started trending on social media earlier this morning after she posted some disturbing videos on social media. The contents of the videos included her dead cat and the singer appeared to boil what netizens presume is the dead cat's remains in the videos. She later pulled down the videos but a number of netizens took to social media and reacted to the same. However, she has not offered any explanation for the videos yet.

Singer Azealia Banks recently lost her pet cat, with whom she seemed pretty close. However, in a recent video, she was seen exhuming the dead remains of the cat and Banks was heard saying, “the cat is in the bag”. In the next video, she was seen cooking something and netizens assume that it was her cat that she was cooking in the boiler in the video.

Azealia took down the Instagram post soon after it garnered criticism from netizens. However, a number of people on social media had saved it and later shared it discussing the singer’s actions. Watch the videos below.

AZEALIA BANKS DUG UP HER DEAD CAT AND COOKED IT... i have no words for 2021 this is not the year pic.twitter.com/Pn11u5uLUt

A number of netizens gushed to Twitter and expressed their opinion on the same. Several netizens also made memes where they expressed how shocked they were to find out what the singer had been trending for. Numerous other netizens condemned the acts of the singer and stated their theory about the same. Read some of the comments by the netizens below.

when youre eating dinner at azealia banks house and she tells you what youre eating #azealia pic.twitter.com/wkeJ26tXdS

Azealia Banks when she gets hungry pic.twitter.com/JvqimbWyyP

Me checking to see why Azealia Banks is trending. pic.twitter.com/lJPw6BjvCp

A while back, Azealia Banks had posted another controversial picture regarding her dead cat. The singer had shared a picture of some of her décor items wherein she had placed a bottle of Veuve Clicquot, a $100 bill, a bottle of Chanel perfume, a crucifix, peacock feathers, and an animal skull (which many have speculated belongs to the dead cat), among other items. The picture was taken down soon after it drew criticism from netizens on social media. 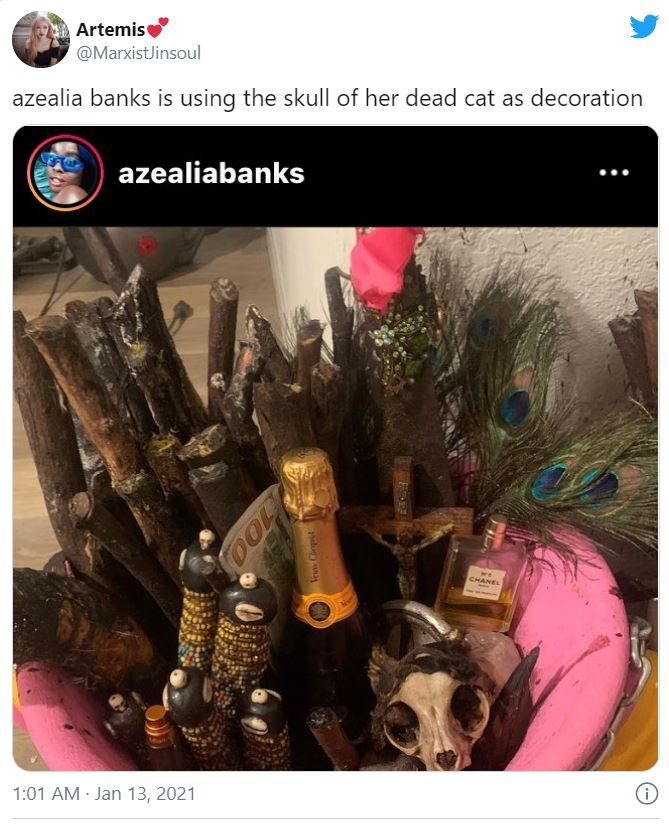