Taking to Instagram, Cameron Diaz' husband, Benji Madden wrote a sweet note for the actor on the occasion of their 7th wedding anniversary. Read further. 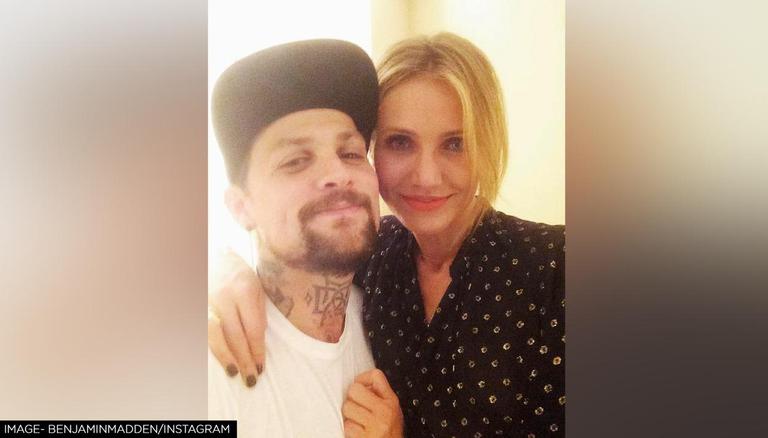 
Benjamin Madden, the prominent American singer better known as Benji Madden, recently took to social media and penned a heartfelt note for his wife, Cameron Diaz on the occasion of their 7th wedding anniversary. He expressed his love for the Charlie's Angels actor and stated how he always dreamt of a family as they have. In response, even Cameron Diaz penned a lovable reply expressing her love for him.

Many celebrities and fans took to Benji Madden's social media post and stated how they are left in awe of their love story while others stated that they are sharing some major couple goals for them.

Benji Madden recently took to his official Instagram handle and shared a stunning painting with a white tiger and a blue vase. He also penned a beautiful wedding anniversary wish for his wife, Cameron Diaz as they completed seven years of togetherness and stated how he always wanted a family that was happy, peaceful, consistent, loyal and unconditional equally filled with passion and depth. He further stated that calling a honeymoon wouldn't cover it and mentioned that the only challenge they had was making time go slower because life goes by fast in the happy lane. While signing off, he wished her a happy wedding anniversary and expressed how much he loved her.

The caption read, "Today 7 years married  Always dreamed of having a family like this. Happy, peaceful, consistent, loyal and unconditional equally filled with passion and depth. Calling it a Honeymoon doesn’t cover it. Real life. The only real challenge we have is making time go slower cause life goes by fast in the happy lane, Always and forever knowing we are home @camerondiaz Happy Anniversary I love you!!" (sic)

Many celebrities namely Joel Madden, Cleo Wade, David Puckett, Jason Ellis, David Katzenberg and others took to Benji Madden's latest Instagram post and wished them a happy anniversary. Many of them also congratulated them on completing seven years together while others stated how lucky Cameron Diaz is. Many fans also dropped tons of hearts and heart-eyed emojis in the comments section and the and mentioned how his post made them emotional. Even Cameron Diaz responded to the post and stated "YOU MORE AND MORE EVERYDAY. Happy, peaceful, consistent, loyal and unconditional. Passionate and deep = OUR LOVE LOVE YOU FOREVER AND ALWAYS." Take a look at some of the reactions to Benji Madden's latest Instagram post for Cameron Diaz. 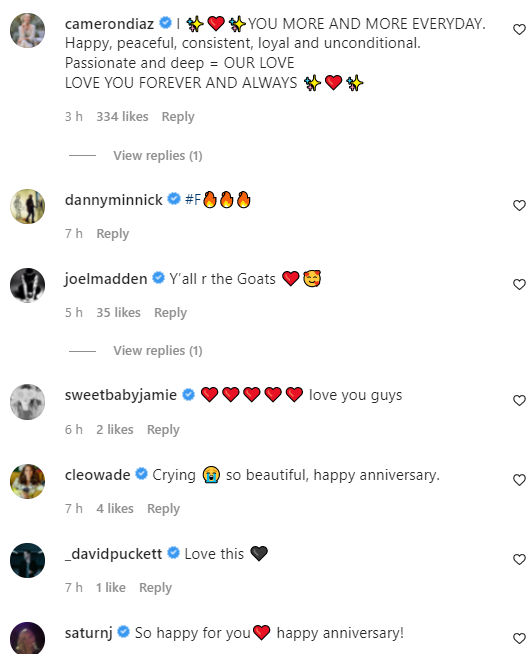 WE RECOMMEND
Cameron Diaz turns 49: Watch her Iconic 2000's movies that gained cult-classic status
Cameron Diaz on making Hollywood come back; says, 'it's a different time in my life'
Cameron Diaz reveals the real reason behind her long break from acting
Cameron Diaz talks about why she quit acting, says wanted to ‘make life manageable’
Cameron Diaz opens up on motherhood, calls mothers without childcare 'superheroes'
Listen to the latest songs, only on JioSaavn.com