The South Korean K-pop band, BTS has claimed victory for the third time with their song ON at SBS Inki Gayo Music Show and got 7393 points on March 1.

The South Korean K-pop band, BTS has claimed consecutive victory for the third time for their song ON at SBS Inki Gayo Music Show with 7393 points on March 1. The second place was won by IZ*ONE's Fiesta, and the third was again won by BTS' Black Swan. Soon after BTS was announced as the winner, thousands of their fans started posting congratulatory messages with the hashtag, '#ON3rdWin'. 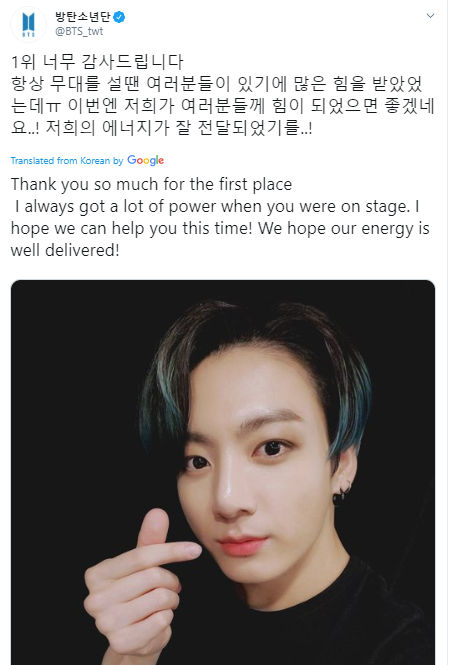 While accepting the award, BTS member, Jungkook admitted that he misses the chants by their fans whom they call an “army”. Due to the increasing dread of coronavirus, the band has cancelled their four concerts in Seoul where the virus cases have surpassed 3,700. Earlier, they had also live-streamed a news conference for their latest album instead of holding it in front of an audience. They streamed the conference on YouTube and the band's management said that the seven members bowed to a virtually empty hall. The South Korean band even answered previously selected questions from journalists.

Since the final rounding up was done between the two songs both by BTS and one by IS*ONE, fans not only found it hilarious but also shared memes across social media platforms. While the band's fan celebrated the third win by their song, ON. Most Twitter users also said they miss BTS performances and attending their concerts.

You know you’ve made it big when you have to compete with yourself 😂😂 #BTSvsBTS pic.twitter.com/go0nKtK2GQ

BIGGEST STAGE IN INKIGAYO HISTORY ONLY FOR THESE LEGENDS #ON3rdWin
pic.twitter.com/yv0eZbeav6

Jungkook’s full speech #ON3rdWin
“I really miss your cheers that we used to hear always after winning the 1st prize. Thank you so much. We’ll work hard for the remaining promotion. Love you 🤍”pic.twitter.com/7L9NQkaxGZ

imagine denying bts is the best after watching their stage#ON3rdWin pic.twitter.com/ldBuz9EriA

Congratulations to @BTS_twt for receiving #ON3rdWin on SBS Inkigayo! 🏆 pic.twitter.com/eq3QkPVxK3

Jungkook have said before the performance that he misses ARMY and then he mentioned that he misses hearing fanchants when they win no 1 ... Jin added that BTS wants to see ARMY :((
( BTS and ARMY are just one inseparable family )😭💜@BTS_twt #ON3rdWin
pic.twitter.com/EMm6iEZ7aK

god hoseok really takes my breath away each time he performs this part. the energy he puts into it, the delivery he provides, the pure power in each & every move.. its unparalleled, no one is doing it like bts. no one #ON3rdWin pic.twitter.com/uHhMetvcc2

BTS REALLY ON ANOTHER LEVEL #ON3rdWinpic.twitter.com/2pNexCnecm