Chris Hemsworth has donned a new look for a commercial for a fitness app. He has shared the video of the same on Instagram. Read ahead to know more.

Australian actor Chris Hemsworth has become people's favourite after he starred in the Marvel movies as Thor, the Lord Of Thunder. Shedding his muscular look, the actor has donned a new one for a fitness commercial. He took to Instagram to share a video of the same which has left his fans and followers in splits.

In the video, Chris' disproportionate face is superimposed on the bodies of other men and women. He is seen working out by lifting dumbles and also seen performing yoga in the video. Chris also says that it not him who is working out but it is his team doing so. Chris's face is also edited on the body of a baby girl who is sitting on the back of her mother. In the caption, he wrote, "If it’s results you wanna see my team is a-head of the game".

Chris Hemsworth's fitness advertisement post has garnered over 4.1 million likes within ten hours of uploading and is still counting. Several celebrities like Jason Momoa, Gal Gadot, and Ryan Reynolds have also commented on the post by saying that they loved the commercial. His fans and followers also commented on the video by saying that they got confused when they first saw the video. See their reactions below: 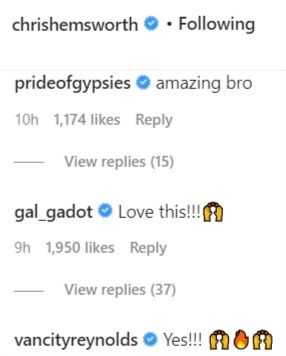 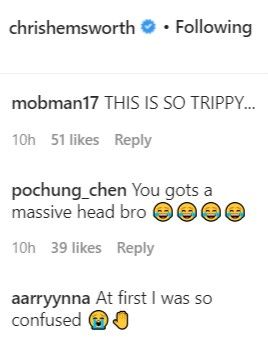 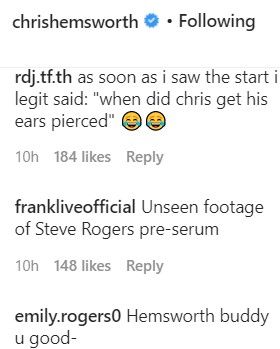 The actor's Instagram is full of pictures and videos from his personal and professional life. He often shares pictures with his family on the photo-sharing platform. He recently uploaded a photo with his wife and actor Elsa Pataky. Chris has awkwardly smiled for the cameras whereas his wife has stuck her tongue out.

Chris rose to fame after his performance in the Australian series Home and Away. He also starred in a Star Trek movie as George Kirk. The 27-year-old actor has been a part of the Marvel Cinematic Universe for eight films. Some of his other popular movies are The Cabin in the Woods, Snow White and the Huntsman, Ghostbusters, and Men in Black: International. He is currently filming for his upcoming Marvel movie Thor and Thunder. The movie stars Tessa Thompson, Natalie Portman, Christian Bale, Chris Pratt, Jaimie Alexander and is slated to release in 2022.

Also read | Regina King To Step Into Shirley Chisholm's Shoes For Biopic; Calls Her 'an Inspiration'