Did Angelina Jolie Spill The Beans On 'Eternals' Sequel At The World Premiere? Watch

As the entire cast of the 'Eternals' attended the world premiere in Los Angeles, Angelina Jolie gave a major hint at the sequel to the MCU film. Read further. 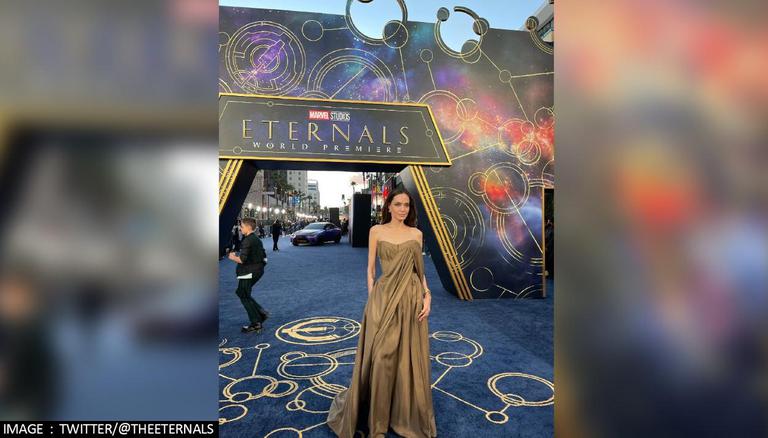 
As the Eternals World Premiere was held in Los Angeles on October 17,  2021, the event was star-studded with numerous actors making a snazzy entry to the red carpet. While the cast of Eternals interacted with the anchor while showcasing their looks on the red carpet, Angelina Jolie gave a major hint at Eternals sequel.

For the Eternals World Premiere event, Angelina Jolie chose to wear a brown strapless gown while her daughters sported her iconic attire from Oscar 2014 and the Emmys 1998. But what caught the fans' attention the most was Angelina Jolie's red carpet interview with co-star Kumail Nanjiani.

Will 'Eternals' have a sequel?

As the popular cast member of the highly-anticipated movie, Eternals, attended the World premiere, Angelina Jolie spilled the beans about the upcoming sequel when she interacted with the hosts. As she was accompanied by her Eternals co-star, Kumail Nanjiani, the latter began praising Jolie's performance in the film and stated how it was so inspiring and intimidating. He also stated how it felt really special to watch her play her character of Thena and added how she conveyed through her physicality so well. In response to the praises, Angelina Jolie stated that their characters were just obsessed with each other and then added that she hoped their characters were very good sparring partners in the sequel because they were polar opposites.

She stated, "Could you tell, we both are obsessed with each other’s characters? So we’re hoping in the sequel, our characters are very good sparring partners, because we’re almost polar opposites. But yet they’re both a little out there, so they’d be a good time.”

In response to that, Kumail agreed to her and stated that it would be a great pairing while the hosts wished that Kevin Feige, who is the President of Marvel Studios, was listening to this as it seemed to be a good idea.

The movie has been slated to have a theatrical release in the United States on November 5, 2021, as part of Phase Four of the MCU. The movie cast will include Richard Madden as Ikaris, Gemma Chan as Sersi, Lia McHugh as Sprite, Kumail Nanjiani as Kingo, Lauren Ridloff as Makkari, Brian Tyree Henry as Phastos, Don Lee as Gilgamesh, Harish Patel as Karun, Salma Hayek as Ajak, Kit Harington as Dane Whitman, Angelina Jolie as Thena and many more.