Netizens have been scandalized after seeing the latest video of Demi Moore walking the ramp at the Fashion Week. Find out did Demi Moore undergo plastic surgery

Often times when fans don’t see their favourite celebrity for a long time, any drastic change in their appearance noted when they reappear in the public eye evokes strong reaction among the fans. This is exactly what has happened with the 58-year-old American actress Demi Moore. The actor who most recently appeared in the 2020 film Songbird, was most recently seen walking the runway for the Italian luxury brand Fendi. However, after her appearance on the fashion show, many fans tweeted about how different her face looked than usual. Many also speculated that Demi Moore had undergone plastic surgery.

Many people noticed the stark lines on the G.I. Jane actor’s countenance as she gracefully walked down the runway during Paris Fashion Week on Wednesday, Jan. 27, 2021. The 58-year-old was adorned in a swooping and elegant black outfit, a long-sleeved jacket that hung around her shoulders paired with matching pants of the same material. 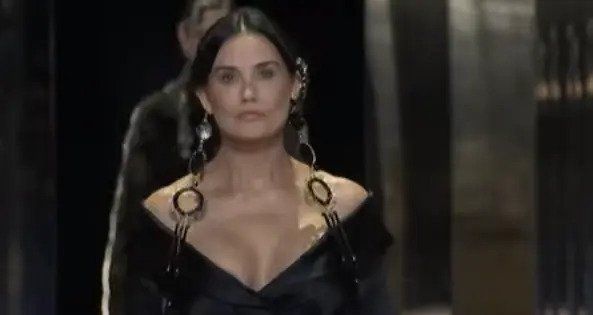 That moment when Demi Moore waves and smiles at you ðŸ¤£ðŸ¤£ From an icon to a baby icon ðŸ¤£ pic.twitter.com/h8qb0lXME4

Demi was also rocking long, dangling black earrings during the surprise. However,  despite the beauty of her outfit, a lot of the conversation about her appearance centred around her. One Twitter user wrote, "Doesn't look anything like Demi Moore to me. And if it is Demi Moore, the surgeon that did that to her is a quack." So far, Demi who is extremely active on her social media profiles has not revealed undergoing plastic surgery.

The pressure these women must feel to remain young and current that makes them do this to their face is mad. Demi Moore was absolutely beautiful.

I love Demi Moore but what in the world happened to her face ðŸ¤§ðŸ¥ºðŸ˜­ Don't tell me its just contouring coz it's not. ðŸ˜³ pic.twitter.com/d1o1hPjQJl

I saw articles about Demi Moore opening for Fendi at a runway show and scrolled down to see the photos. Didn't look like her, so I thought journalists got it mixed up and used someone else's photos. The shock when realizing it is in fact THE Demi Moore. Just uh-

With a new face.

The Demi Moore talk reminds me of the messed up way some women in our society deal with getting older. Forced to carve their face into a caricature because we put a forced expiration date on beauty.

Another Twitter user states that there is enormous pressure on women to remain younger looking and many undergo plastic surgery for the same reason. The user further stated that Demi Moore was absolutely beautiful. This is not the first runway appearance for Demi as she recently also walked the runway on Rihanna’s Savage x Fenty show, rocking a stunning bodysuit with fishnet stocking.

Recently, the actor also made headlines when she revealed to People magazine that she had been quarantining with ex-husband Bruce Willis. The couple were social distancing with their children, Rumer, Scout, and Tallulah. The report revealed that people found that it was strange that Bruce wasn't spending indoor time with his second wife, Emma Heming Willis, and their two daughters. Soon rumours started flying that Bruce was no longer with Emma and he and Demi were back together, but those rumours proved to be nothing more than suspicions.

Read | '12 Monkeys' Ending Explained: What should one make of the finale of Bruce Willis' film?