Kourtney Kardashian And Scott Disick To Patch-up? Fans Root For The Couple

Kourtney Kardashian and Scott Disick's fans want the former couple to reconcile after their many getaways together along with co-parenting. Read on to know more

Kourtney Kardashian and Scott Disick's split had sure left many fans heartbroken. And now, ever since Scott's breakup with Sofia Richie, fans have been hoping for him to reconcile with Kourtney. Even though the former couple has gone through several ups and downs in the past, the two are currently setting quite an example in co-parenting their three children namely Mason Disick, Penelope Disick, and Reign Disick.

Recently, Kourtney also sent netizens into a frenzy as she shared a stunning picture of herself wherein she could be seen donning Scott's shirt. She had further paired up the oversized yellow checkered shirt with a white outfit and knee-length boots. Within no time, fans could be seen gushing over the picture.

One of the fans also asked under the post if the Poosh entrepreneur is wearing Scott's shirt. While another fan declared that Kourtney and Scott's reunion will be the biggest 'redemption' for 2020. Take a look at her post and some of the reactions from the fans. 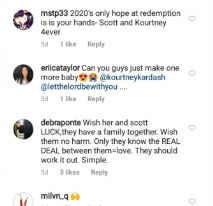 According to media reports, amidst his ongoing split with Sofia, Scott had also accompanied Kourtney and his kids on a trip to Utah. The American model had also joined the Kardashian and Jenner family to their family getaway to Wyoming. It seems that fans are waiting with bated breath to see if the former couple will reconcile and fulfill their wishes.

Kourtney and Scott started dating in the year 2006. The couple had quite a whirlwind romance which was full of ups and downs but they decided to part ways in the year 2015. According to media reports, one of the major reasons behind their split was Scott cheating on Kourtney. The former couple had soon moved on with Kourtney dating model Younes Bendjima and Scott starting a relationship with Sofia.

But it seems like Kourtney and Scott have now rekindled the hope of their fans with their patch-up rumours with them starting to co-parent their children actively. Reportedly, Kourtney has also been a strong pillar of support for Scott amidst his troubled separation with Sofia.