Grimes' mother took to Twitter and slammed Elon Musk for his tweet about 'Take the red pill'. She deleted the tweet later. However, it gave way to controversy.

Even though Elon Musk and his girlfriend just welcomed a baby boy, it seems like things are not all well between Grimes’ mother and the Tesla owner. Recently, Grimes’ mother appeared to take a sly dig at the tech entrepreneur in a now-deleted tweet. Read on to know more about it.

How did it all start?

Recently, Elon Musk had taken to his social media handle where he had posted “Take the red pill”. The tweet was posted with reference to the film Matrix. But there were many fans who thought that the tweet had a political meaning to it, which it also did as it was about the US taking the plunge to restart the economy.

However, Grimes’ mother, Sandy Garossino took it rather negatively. She took to her social media handle and slammed Elon Musk without taking his name. She said, “If your partner went through a challenging pregnancy and childbirth in the last two week. And you were over 16 years old, Would you be blaring MRA nonsense on Twitter right now? (sic)”

However, Sandy Garossino deleted the tweet later. But fans were quick to notice it and took screenshots of it. Check out the tweets below.

This is Grimes' mom. Thanksgiving is going to be fun. pic.twitter.com/7i3oLnzvrO

Even after deleting the tweet, Sandy Garossino did not shy away from making her displeasure clear. In a reply to a Canadian political consultant, Gerard Butts, where he was criticising Musk, Sandy Garrisino pointed out the correct age of their baby. She wrote in her comment, “Not yet 2 weeks old.” 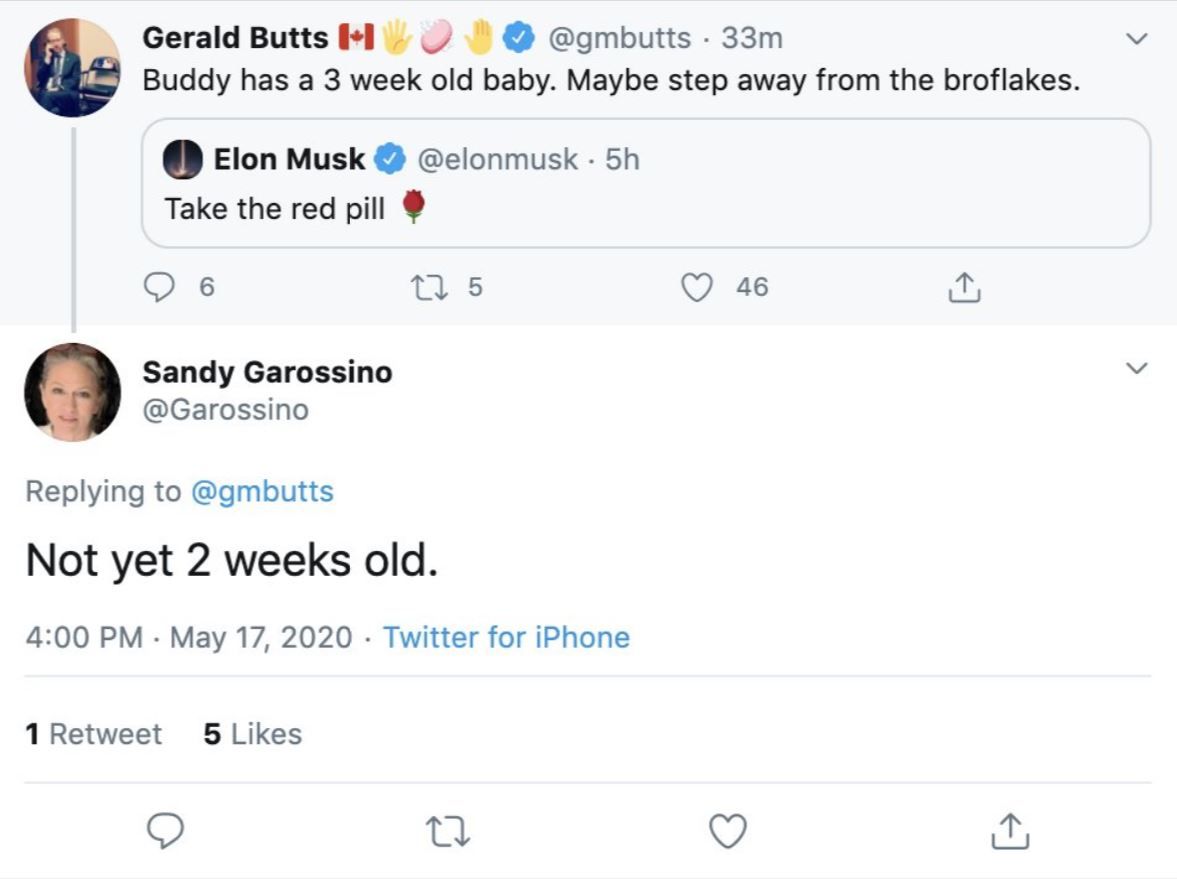 Read Also | Elon Musk And Grimes Reveal How To Pronounce Son's Name X Æ A-12, But They Differ Again

On another note, this is not the first controversy that the baby has made it to the headlines. though earlier it was under happier conditions. When Elon and Grimes shared the name of their baby, X Æ A-12, the rather unusual name had sparked a meme fest on social media. Moreover, Musk and Grimes had provided different versions of the pronunciation of their baby boy’s name.

The two had shared a banter regarding the same on Twitter when Elon had pointed out a typo in Grimes’ tweet. The later had defended herself saying that she was under heavy medications and was dizzy when she had typed that out. Elon musk had called her an angel.

On the work front, Grimes had recently released her album, Miss Anthropocene in the year 2020. The songs of the album were well received by the fans of the singer. At the moment, she has been giving all her time and attention to her newborn baby.

PEOPLE HAVE PLEDGED SO FAR
LATEST NEWS
View all
6 hours ago
Tom Holland's birthday: Here are times when he spoiled 'Avengers' for fans
9 hours ago
'All lives do not live in fear of getting killed': Actor Gwyneth Paltrow pens strong post
9 hours ago
Sofia Richie and Scott Disick parted ways because of Kourtney Kardashian?
9 hours ago
'John Wick 4' director shares interesting details about the Keanu Reeves starrer
10 hours ago
Elisabeth Moss on 'The Handmaid's Tale' resuming production; says no life is worth a show