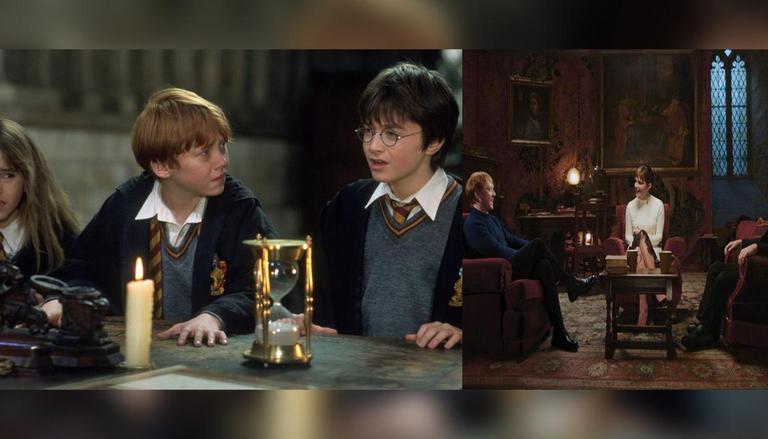 
Harry Potter reunion first look which was released ahead of the franchise's 20th anniversary, is set to bring its fans one of the best New Year's gifts. The makers will release a special reunion feature, Harry Potter: Return To Hogwarts, to mark its first film Harry Potter And The Sorcerer's Stone's 20th anniversary. Ahead of the release of the special feature, the makers ignited the excitement among the audience by dropping a photo of their beloved trio, Daniel Radcliffe, Rupert Grint and Emma Watson (Harry, Ron and Hermoine).

In the first photo from Harry Potter Reunion Special, Daniel Radcliffe could be seen donning a black tuxedo while being seated on a brown sofa. On the other hand, Rupert Grint went for a blue sweater and black pants for the special feature. Emma Watson looked beautiful in a white turtleneck and a skirt which she paired with black heels. Both Daniel and Emma were seen smiling at Grint while posing for a photo.

Ahead of the release of the reunion special, the filmmakers unveiled the official teaser of Harry Potter: Return To Hogwarts. The makers termed the teaser as the "invitation you've been waiting for has arrived." The teaser saw different cast members, including Helena Bonham Carter, Robbie Coltrane and Matthew Lewis, receiving their invitations. The makers were creative enough, as the teaser began with The Daily Prophet featuring the headline, "Hogwarts Welcome Back Alumni."