American actor and singer Donnie Wahlberg recently left a $2,020 tip at a restaurant in Massachusetts, carrying forward his habit of leaving generous tips.

American actor and singer Donnie Wahlberg recently left a $2,020 tip at a restaurant in Massachusetts, carrying forward his habit of leaving generous tips for restaurant staff. A photograph of the bill was shared by ‘Marshland Restaurants and Bakery’ on Facebook and has been doing rounds of the internet. The details on the bill reveal that the celebrity's kind tip was not on an expensive bill but on an amount of $35.

While the restaurant operators blacked out the other details while sharing, they intentionally wrote #2020tip challenge on the bill to encourage other people tip with open hearts and pockets. "A very special thank you to our friend @donniewahlberg! When asked about it all he said was “who’s up next?!”  the eatery wrote in the caption revealing the incident happened on November 7. Wahlberg, a Boston native, left a $2,020 tip at an Illinois IHOP earlier this year and in 2017, left a $2,000 tip at a Waffle House in North Carolina, Associated Press reported.

Since surfaced online, the celebrity's generous act has been winning hearts on the internet. The post has not only racked up over 1.3 thousand likes and over 600 shares but also garnered plaudits from netizens. "Such a nice guy! I’m curious what his favorite meal on the menu is!," wrote a Facebook user. "So kind and generous! I bet that’s one grateful server!," added another. "He is awesome when it comes to this. He just has so much to give and does any chance he gets. He truly is a blessing," read another comment.

Read: Man Held For Duping Delivery Boy By Posing As Customer In Delhi 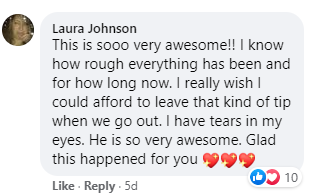 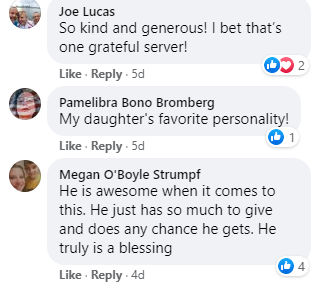 Read: Customer Leaves $10k Tip In Florida Restaurant After It Was Forced To Shut Amid COVID-19

In a similar incident, an anonymous customer left a $10,000 tip in a US restaurant. This incident took place a day prior, when the state's governor ordered the closure of the Florida restaurant, to shut due to the coronavirus pandemic, as per reports. The customer had left $10,000 tip to be divided among the staff of the restaurant and it was evenly distributed amongst Skillets’ 20 staff with everyone receiving $500.

The proprietor of Skillets in Naples, Florida, Ross Edlund, mentioned on the Facebook web page of the restaurant that the gesture reveals there are nonetheless truly fantastic people in the world. Edlund reportedly said that they have an amazing Skillets family which extends to their guests as well and that he couldn't be happier to be a part of a community where this type of generosity exists.