Johnny Depp wins hearts as he distributes handwritten thank you notes for all of his fans who waited for him outside the London court. Check out the details. 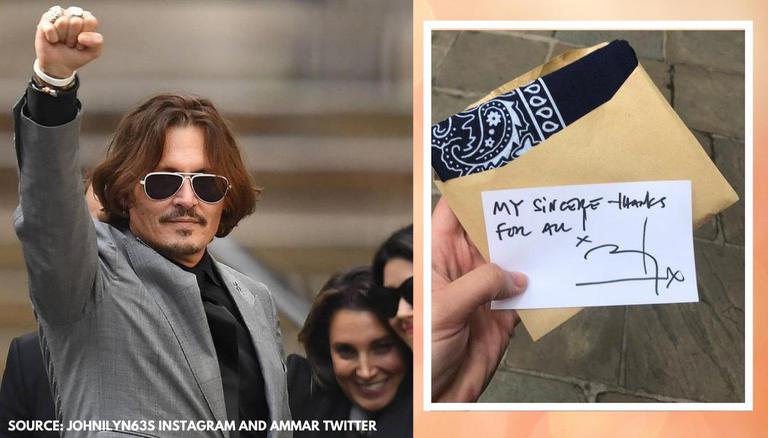 Actor Johnny Depp handed out handwritten thank you notes to his fans outside the London High Court who have been supporting him throughout his libel trial. On the last day of Johnny Depp’s libel trial, which was held on July 28, Depp’s team was seen handing out brown coloured envelopes to each of his fans standing outside the court. The envelope consisted of a handwritten thank you note written by the Pirates of the Caribbean actor along with a black coloured bandana, similar to the one he has been wearing to court each day.

ALSO READ: Amber Heard: 'I Was Afraid Johnny Depp Was Going To Kill Me'

'My sincere thanks...': Johnny Deep

Johnny Depp giving thank you notes & bandanas to his fans at the last day of the trial today is the BEST THING I'VE EVER SEEN. The notes aren't printed but each & every note is hand written by him. This world don't deserve him. I don't know a better man & that's on PERIOD. pic.twitter.com/NoBksFmlR0

Fans had been showering Johnny Depp with gifts and flowers on all the days of his trial. His fans also made posters for the actor that they held out when he entered and left the London High Court. They would also chant ‘Justice for Johnny’ and were often heard encouraging the actor to stay strong. Thus, Johnny Depp decided to thank his fans for their unwavering support.

The gesture from the actor was highly appreciated by his fans. While posting pictures of the gift on Twitter, a user mentioned that the world ‘doesn’t deserve’ Johnny Depp. The user wrote, “The notes aren't printed but each & every note is hand written by him. This world don't deserve him. I don't know a better man & that's on PERIOD.” [sic]

According to a report in AP, Judge Andrew Nicol will retire later to consider his verdict. He is expected to hand down his ruling in several weeks. NGN's lawyer, Sasha Wass, had mentioned in her summing-up that there was no doubt Depp “regularly and systematically abused his wife" and so the “wife-beater” label was justified.

Johnny Depp is suing a publication and its executive editor over an article that called him a ‘wife-beater’. The article also referred to have ‘evidence’ that Johnny Depp attacked Amber Heard. Johnny Depp denies hitting his then-wife, while Amber Heard, 34, has submitted details of 14 occasions during their relationship when the actor has assaulted her. The paper has to prove that the allegations that they made against the actor are substantially true. According to reports, the verdict of the libel trial will be out in October.