Kelly Ripa recently took to her social media to share a workout video of her husband, Mark Consuelos and people are going gaga over it. Take a look.

Actor Kelly Ripa just left the internet in a pool of thirst as she posted a shirtless video of her husband Mark Consuelos working out. In the video, Consuelos is seen pumping out a set of leg raises at the gym. The actor is seen showing off his abs with every move he makes and a lot of people, celebrities and fans, quickly took to the comments section on the post to express their reactions to the video.

ALSO READ | Why Is Marisol Nichols Leaving 'Riverdale'? HERE Is The Reason For Her Unprecedented Exit

The video is filmed by Kelly Ripa herself as she threw some workout motivation at her fans by captioning the post as, "How bout a little #workoutmotivation for the extremely thirsty". 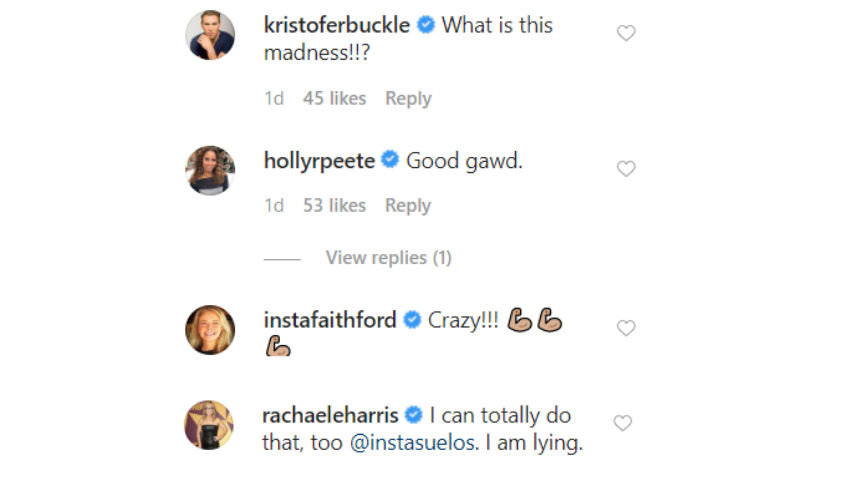 While the list of celebrities is long, it seems like Mark Consuelos is only waiting to see what their daughter has to say about it. Mark tagged their daughter, Lola Consuelos, under Kelly's post stating that he is waiting for her comment. Judging from Mark and Kelly's previous banters on social media, Lola's comments are expected to tickle the Internet.

Earlier in February, Kelly Ripa took to her social media to share a little boomerang of her. Mark could relate and took the opportunity to flirt with his wife. While Lola's thoughts on Mark Consuelos' cheeky comment were "Absolutely repulsive." Celebrating over 24 years of marriage, the couple is parents to three kids. But the duo still adorably lavish each other with attention, online as well as offline.

ALSO READ | Why Is Skeet Ulrich Leaving 'Riverdale'? FP Jones Opens Up About His Exit

ALSO READ | Why Is Skeet Ulrich Leaving 'Riverdale'? FP Jones Opens Up About His Exit

PEOPLE HAVE PLEDGED SO FAR
Why is Skeet Ulrich leaving 'Riverdale'? FP Jones opens up about his exit
Cole Sprouse Riverdale contract ending? Everything you need to know about Jughead
Why is Marisol Nichols leaving 'Riverdale'? HERE is the reason for her unprecedented exit
'Riverdale' actor Lili Reinhart's red carpet looks that are too good to miss
Robert Downey Jr accused by Terrence Howard of throwing him out of the MCU
’Hawaii Five-0, ‘Good Doctor’ benefit from stay-at-homes
Kylie Jenner named Forbes' youngest billionaire for second time in a row
DO NOT MISS
LOCKDOWN TO BE LIFTED IN PHASES?
93 NEW MARKAZ CASES IN DELHI
BS YEDIYURAPPA ON LOCKDOWN
UP TO SEAL 15 DISTRICTS
ASHISH NEHRA ON YUVRAJ SINGH
BERNIE SANDERS SUSPENDS CAMPAIGN