Kim Kardashian's latest social media post is an image of a painting that she has called a 'North West Classic'. The reality star shared a painting made by her eldest daughter North. The picture once again started a debate in the comment section whether the oil painting has been done by the 7-year-old or not. A few weeks ago, Kim Kardashian had responded to similar comments about North’s painting.

Kim Kardashian never shies away from posting pictures with her family and friends. More importantly, the KUWTK star is often seen posing for some pictures with her four kids, North, Saint, Psalm, and Chicago. Kim's latest post appears to be the same as the picture Kim had posted on her Instagram stories a while ago. Along with the picture, she wrote, “Just had to post this on my main feed bc it’s a North West Classic!”. At the bottom right corner of the painting, Kim Kardashian’s daughter’s signature is also present. Take a look at Kim Kardashian’s Instagram post here.

But as soon as Kim posted the picture, her fans were quickly debating if she and Kanye West’s daughter North had actually painted the picture. One fan wrote, “Can we get an IG Live?”. Another fan agreed to this comment and wrote, “Not a chance who she kidding”. But some fans supported Kim Kardashian’s daughter. One of these fans wrote, “Y’all keep hating doesn’t pass the vibe check”. Another fan wrote, “Can’t wait to see comments from grown adults hating on a child because they are bitter and have no talent lmao”. Take a look at these comments below. 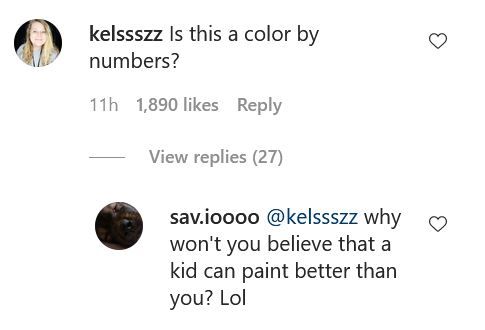 A few weeks ago, Kim posted a picture of the painting done by North and her friend on her Instagram story. After receiving severe backlash and a similar debate being ensued on social media, Kim Kardashian took a firm stand against trolls and wrote, “DON’T PLAY WITH ME WHEN IT COMES TO MY CHILDREN!. My daughter and her best friend have been taking serious oil painting class where their talents and creativity are being encouraged and nurtured”. She continued and wrote, “As a proud mom I wanted to share her work with everyone. I’m seeing op-ed pieces in the media and social media from grown adults breaking down whether or not my child actually painted this”. 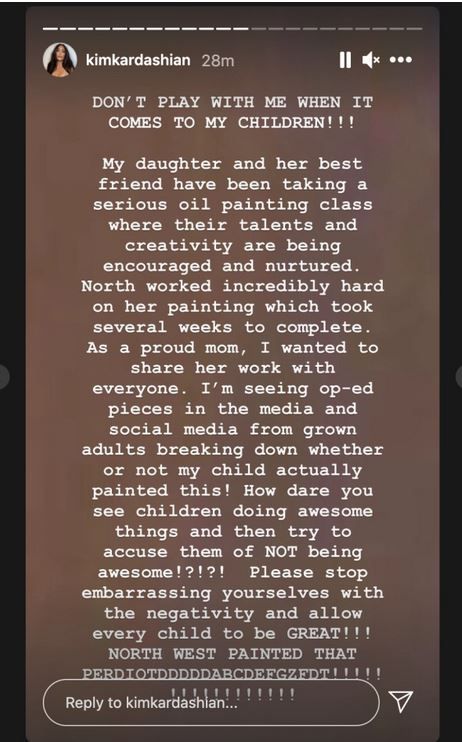