Kourtney Kardashian is staying relevant via social media. But recently her fans started speculating that she is pregnant following her latest Instagram post.

The Coronavirus lockdown has led several celebrities to use social media extensively to stay connected with their fans. The Kardashian and Jenner family are also making sure to stay in the spotlight amidst this lockdown. The latest Kardashian member to cause a major stir on Instagram is Poosh founder Kourtney Kardashian.

Kourtney Kardashian recently took to Instagram and posted a picture of herself posing in a long orange shrug and brown bikini bottom. The Kardashian sister looked every bit gorgeous in this outfit. But fans were quick to start speculating that she is pregnant with her fourth child. Take a look at Kourtney Kardashian's Instagram post here:

Many fans pointed out that Kourtney’s stomach looks a bit bulged up in this outfit. But some fans even called out this speculation and termed it downright rude since Kourtney has not confirmed the news yet. However, when a fan commented on the picture asking her if she was pregnant, she didn't outright deny the news but asked them to "put the blessing out there though". Take a look at the interaction here. 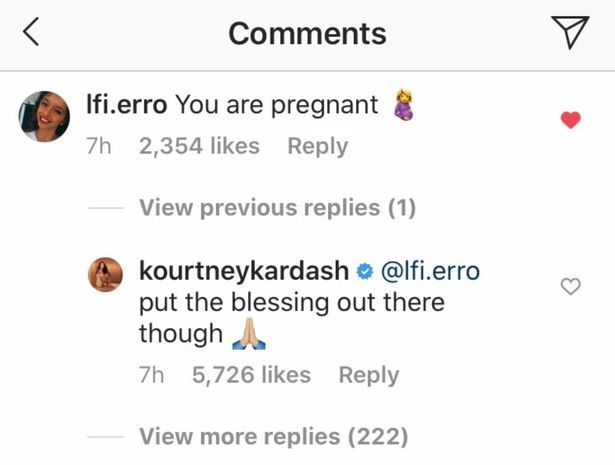 This response got fans to further speculate that the star may want more children in the future. Kourtney Kardashian is already a mother of three kids namely Mason (10), Reign (5), and Penelope (7). She co-parents them with her ex- Scott Disick.

Recently, Kourtney Kardashian and her Kim Kardashian created major headlines with their explosive fight on Keeping Up with The Kardashians Season 18. The fight ultimately resulted in Kourtney deciding to take a break from filming the show. She also publicly announced that she wants to focus on spending time with her kids and her brand Poosh.

PEOPLE HAVE PLEDGED SO FAR
LATEST NEWS
View all
1 day ago
Grimes to legally sell 'a piece of her soul' in her online exhibition titled 'Selling Out'
4 hours ago
Josh Trank says it was inspiring' to work with effortlessly talented' Tom Hardy
1 day ago
Taylor Swift's tweet addressing the President & other top tweets of the week
59 mins ago
Arnold Schwarzenegger shares workout video with pet donkey Lulu by his side; Watch
1 day ago
Taylor Swift calls out Donald Trump on Twitter, fans make it her most-liked tweet ever