Travis Scott To Launch His New Track 'Astronomical' On Fortnite

Putting all speculations to rest, rapper Travis Scott is set to launch his new track Astronomical on the popular third-person-shooter video game platform.

Putting all speculations to rest, American rapper Travis Scott is all set to launch his new track Astronomical on the popular third-person-shooter videogame platform Fortnite. As per reports, there were several leaks about Travis premiering a space-themed song or concert on Fortnite, and now finally the fans could watch the rapper performing his track Astronomical on the video game platform on April 23, 2020.

According to reports, the Wake-Up crooner will be live streaming his song instead of performing it physically in front of a huge crowd due to the coronavirus pandemic across the globe. Travis released an album named Astroworld back in 2018 that showed his fascination with space. He also attended the Astroworld Festival in the same year. This is the reason why he kept the theme of his song Astronomical and it seems that is rightfully based on space. The makers of the video game platform Fornite have reportedly released a statement regarding the launch of the new Travis Scott Events on their platform.

Read: How To Get The Travis Scott Fortnite Skin And What Are Other Rewards? 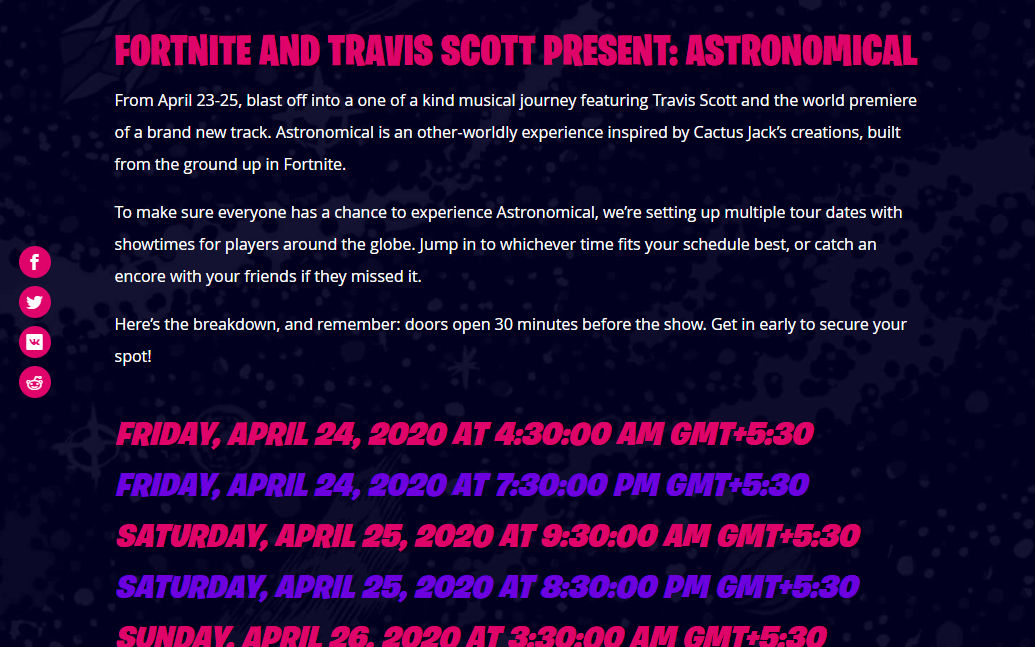 Apart from the song, the video game platform is collaborating with Travis Scott for several other commitments and fan engagements from April 23-25. To make sure that everyone has a chance to experience Travis Scott's Astronomical, the makers have set multiple tour dates with showtimes for players around the globe.

According to the statement released by the gaming platform, fans will get time to hear their favourite star and fans can opt for whichever time fits their schedule best, or catch an encore with their friends if they missed it. Astronomical is reportedly an other-worldly experience inspired by Cactus Jack’s creations, built from the ground up in Fortnite.

Read: Kylie Jenner And Travis Scott Are Not Back Together, Confirms Kourtney Kardashian's Son

The announcement by the gaming company said that the rapper is the newest addition to Fortnite’s Icon Series. The players can get their outfits, emotes, and more starting April 21. And if the players attend any of the Astronomical events, they will score the Astroworld Cyclone Glider and two loading screens for free.

PEOPLE HAVE PLEDGED SO FAR
LATEST NEWS
View all
4 hours ago
Doja cat apologises for 'offensive' title of old track, but denies racist comments
5 hours ago
Kourtney kardashian shares throwback pic from a trip, calls it an 'escape to the desert'
3 hours ago
From elon musk to jay z, check out celebs who gave unusual names to their kids
5 hours ago
'dynasty' cast's net worth proves that they're just as wealthy as the reel 'carringtons'
5 hours ago
Times kylie jenner sported co-ord sets during quarantine; see photos