'Love Island's' contestant Eve Gale is facing scrutiny after she claimed that US rapper Tyga had slid into her DMs and tried to chat with her, netizens mock her

Love Island's contestant Eve Gale is facing scrutiny after she claimed that US rapper Tyga had slid into her DMs and tried to chat with her. However, the rapper reportedly mocked the islander and absolutely rinsed the reality contestant on social media. Tyga also mocked Gale's claims and liked a tweet about the show in which a netizen posted a side-by-side photo of the real Tyga and a white boy, which is definitely isn't Tyga. 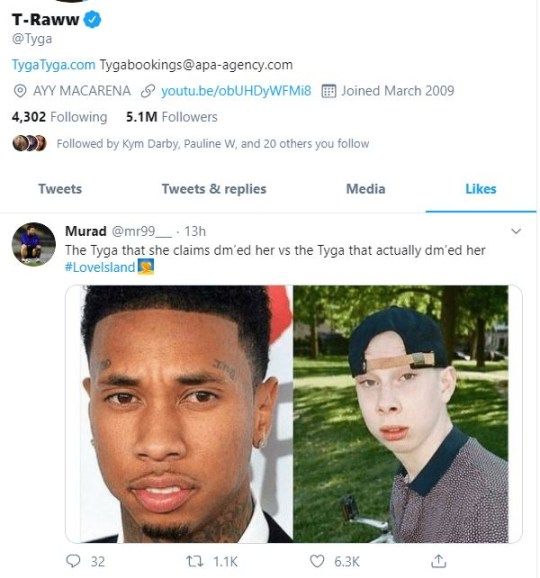 After Eve's claim in the last episode of Love Island, Twitter was abuzz as many doubted the 20-year-old and did not believe that she had actually received a message from Tyga. After Tyga liking the Tweet with a caption, “The Tyga that she claims dm'ed her vs the Tyga that actually dm'ed her”, the rapper also tweeted three laughing emojis, however, he did not mention what he was so tickled by. Many netizens speculated that he was laughing about Gale.

One internet user wrote, “Bro went from A BILLIONAIRE to this one ONE twin #LoveIsland KMT let me Try my luck”. Another netizen jokingly wrote, “So Tyga watches #LoveIsland huh lool”. One Twitter user also asked Tyga, “Well is it true or not”.

Sorry she was taking about the guy on the right.🤭 pic.twitter.com/076yGZzQni

READ: Taylor Swift's Best Bling Outfits That Are Perfect For Your Next Party

Eve entered the Love Island villa with identical twin sister Jess and in the last episode she brought up the artist after the men were asked to guess which girl had claimed to have exchanged flirty messages with a famous rapper. While revealing the secret, the 20-year-old said that Tyga had slid into her DMs but nothing more. This wasn't the first mention of Tyga while she spoke about her celebrity connection before entering the villa.

Gale said, “Tyga, Kylie Jenner’s ex, messaged me. We were both at an event and I posted an Instagram story tagging him. He then messaged me afterwards and we spoke on WhatsApp. Then when me and Jess were in Ibiza, he was there again. He asked me to meet him but we arrived the day he left. Pop Smoke, the R ‘n’ B rapper, messaged me too.”