The Jonas Brothers are nominated for Grammys 2020. Priyanka Chopra Jonas who tied the knot with Nick Jonas is celebrating this massive news with a great shoutout. The actor took to social media to congratulate her husband Nick Jonas, Joe and Kevin for their Grammys nominations. She mentioned in her tweet that she is very proud of the Jonas Brothers and she also shared her love for them.

Even Sophie Turner took to her social media handle to congratulate her hubby and Jonas brothers on their Grammys nominations. Sophie got hitched to Joe Jonas this year and expressed her happiness as the Jonas Brothers got nominated for the 'Best pop duo/group performance' category for their comeback single Sucker for Grammys 2020. The song nominated for Grammys also features Priyanka.

Here is the adorable shoutout from Sophie to Jonas Brothers: 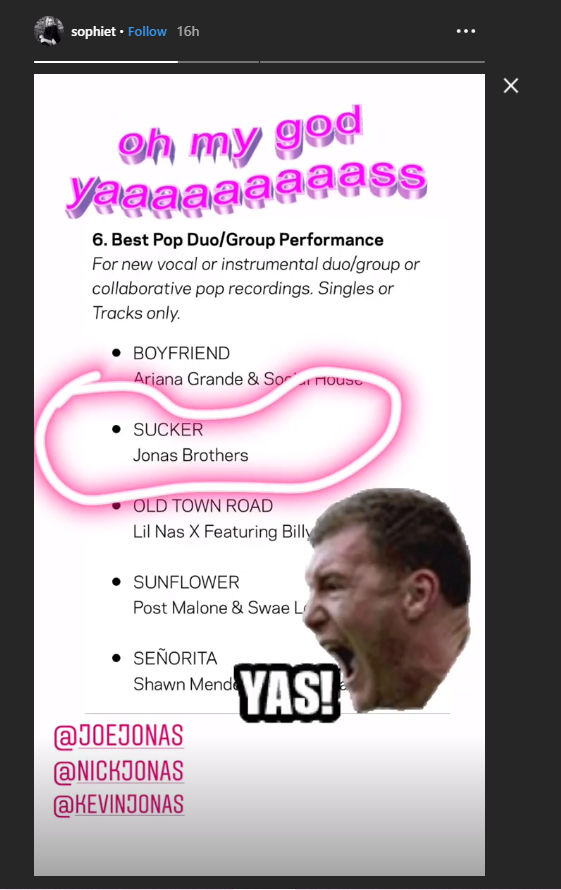 Jonas Brothers will compete with other pop artists in the same category that includes Ariana Grande and Social House (nominated for Boyfriend), Post Malone and Swae Lee ( Sunflower), Shawn Mendes and Camila Cabello (Senorita), and Lil Nas X (Old Town Road). It is almost after 10 years that the Jonas Brothers got nominated for the Grammys again. Joe Jonas shared a pic featuring his brothers as they all seem to be excited about the nomination.

10 years later we are nominated again for a Grammy 🥳 thank you! pic.twitter.com/LE7gsEiLZ0

Fans also shared their emotions on Jonas Brothers nominations by congratulating Nick Jonas and Priyanka Chopra on their social media handles.Here is the tweet by Nick and how fans reacted to their nomination.

Fans reactions to the nomination:

It’s what you guys deserve!! So proud!

love you and so proud of you pic.twitter.com/dR1n6z7o35

We are so proud of you and nick..u featured in sucker and it got nominated..👏👏👏👏❤❤❤ pic.twitter.com/RELJVuw2gS

SO PROUD OF YOU GUYS. WELL DESERVED AFTER 11 YEARS.

Also Read | Grammy Awards 2020: Here Are All The Nominees For The General Field