'The Dark Knight' starring Christopher Bale was a commercial success and fans showered the cast with praises. Here are some interesting facts you will love.

Based on DC comics and the character of Batman, the movie The Dark Knight was the second instalment of Christopher Nolan’s The Dark Knight Trilogy. The movie starring Christian Bale as Batman is considered to be one of the best superhero films made in a decade. Here are some interesting facts about the movie you would love to know about.

Interesting facts of The Dark Knight

The clap scene was not in the script

In one of the scenes in the film, The Dark Knight, Heath Ledger starts clapping inside his jail cell in a mocking way. The clapping scene was not scripted, but Christopher Nolan encouraged the team to continue filming and the sequence made it to the final cut.

Also Read: Robert Pattinson As 'The Batman' To Be Depicted As A Married Man With Kid In Sequel?

The Joker aka Heath Ledger hid for six weeks

To prepare the role of Joker in The Dark Knight, Heath Ledger hid in a motel room for almost six weeks. During his stay, he got into the character deeply, devoting himself to develop the Joker’s tic, the voice and the sadistic sound of laughing.

The chase scene in The Dark Knight which was shot in  Lake Street almost looked real and the Chicago Police Department received many calls from concerned citizens stating that the police are being involved in a vehicle pursuit and were chasing a dark vehicle of an unknown model. Also, the bullet holes on the windshield of the car which Joker drives forms a smiley face.

Also Read: Batman: How Will Robert Pattinson Transform Into The Dark Knight? 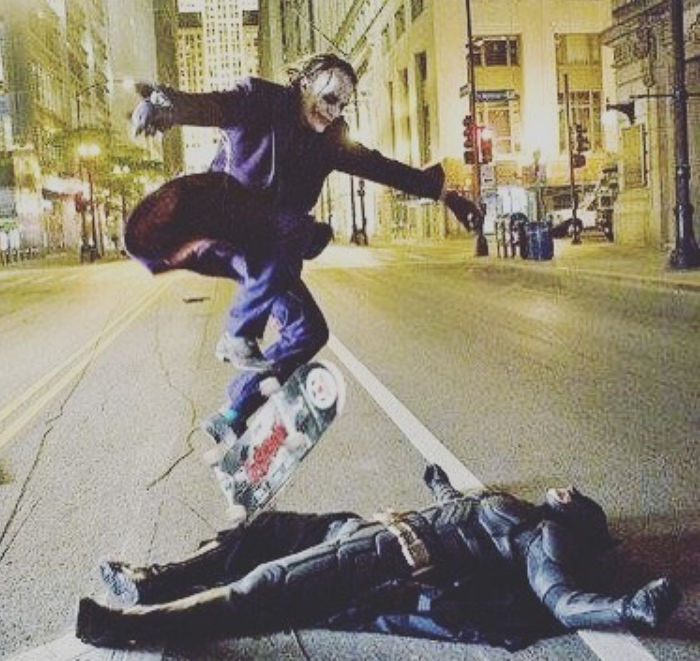 The Dark Knight was dedicated to two people

The movie was reportedly dedicated to Heath Ledger who died from drug toxicity on January 22, 2008. But there was one more person who died and the film was dedicated to him. A stuntman Conway Wickliffe was killed in a car accident.

In one scene in The Dark Knight, where The Joker is dressed as a nurse, his name tag read Matilda. Heath Ledger’s daughter’s name is Matilda and it was named after his daughter.

Heath Ledger wanted to beat him as hard as he could

Christian Bale, in an interview, mentioned that during the interrogation scene, Heath Ledger wanted him to beat him as hard as he could to get the real feeling and make the scene look real.