Hollywood star Gal Gadot who was recently seen in 'Wonder Woman 1984' on Friday shared a series of pictures on her Instagram page, acknowledging young girls and women from all walks of life across the globe. Her list of 'My Personal Wonder Women' also featured Bilkis Dadi, the octogenarian who was the face of the anti-CAA protest in Delhi's Shaheen Bagh in 2020. However, she appears to now have had second thoughts.

'Some are exceptional women I hope to meet'

"Saying farewell to 2020, with all my love to #MyPersonalWonderWomen Some are those closest to me - my family, my friends - some are inspiring women I've loved discovering, and some are exceptional women I hope to meet in the future," Gadot wrote in the caption of the post.

The 35-year-old Israel-born 'Wonder Woman' also shared the same image of Bilkis on her Instagram Story and wrongly captioned it as, "The 82-year-old activist fighting for women's equality in India showed me it's never too late to fight for what you believe in." She later deleted the Story, but the activist is still part of her post in the feed. 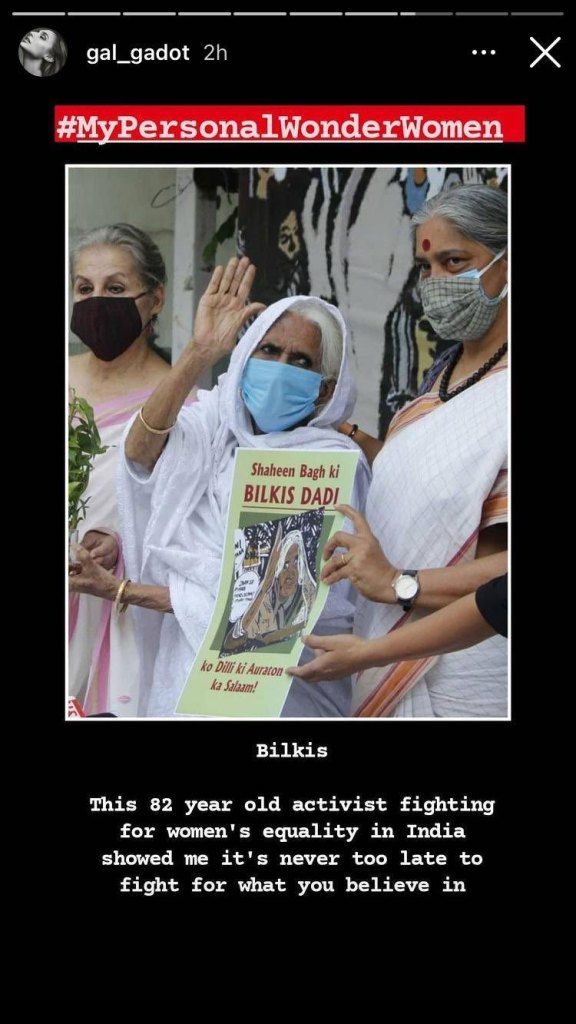 Earlier this year, Bilkis, popularly known as the Shaheen Bagh Dadi, also featured in the Time magazine as one of the 100 most influential people of 2020. Last month, she was stopped from joining the farmers’ protests at outer Delhi’s Singhu border. She said she had gone to the protest site to extend her solidarity to the protesting farmers who are demanding the repeal of the Centre’s farm laws. However, the police sent her back in a police vehicle

Meanwhile, last week, Warner Bros. announced that a third film based on the DC comic superhero is in the works with franchise star Gal Gadot and writer-director Patty Jenkins set to return. According to the studio, the third 'Wonder Woman' movie will conclude the long-planned trilogy and will release theatrically.

"As fans around the world continue to embrace Diana Prince, driving the strong opening weekend performance of Wonder Woman 1984, we are excited to be able to continue her story with our real-life Wonder Women Gal and Patty who will return to conclude the long-planned theatrical trilogy," Warner Bros. chief Toby Emmerich said in a statement to Variety.

The first 'Wonder Woman' film,  part of the DC Extended Universe, was released in 2017 to widespread critical acclaim and minted over $800 million at the worldwide box office. The opening date of for 'Wonder Woman 1984' was pushed back several times due to the Coronavirus pandemic before Warner Bros. decided to release it on its streaming platform HBO Max and theatres on Christmas.

READ | Gal Gadot on whitewashing controversy for playing Cleopatra: 'Anybody can make this movie'