Zooey Deschanel and her boyfriend Jonathan Scott sparked some major engagement rumours after the couple indulged in some Instagram PDA in the comment section.

Zooey Deschanel and her boyfriend Jonathan Scott sparked engagement rumours online due to their Instagram comments on Zooey’s post. These comments are getting some major attention online. Read on to know more details about this story.

Actor Zooey Deschanel and Property Brothers’ Jonathan Scott became the talk of the town when they started dating. The couple has never been shy to flaunt some PDA since they made the announcement regarding their relationship.

Zooey Deschanel and Jonathan Scott even attended the Golden Globes together and were even present at various parties after the award ceremony.

But Zoey Deschanel and Jonathan Scott are creating some major headlines for some other reason. Recently, Zooey Deschanel took to Instagram and shared a picture of herself with boyfriend Jonathan.

She captioned the picture by stating, “One more with my only prom date @mrsilverscott”. This picture was from their Golden Globes appearance. Take a look at the picture that Zoey Deschanel shared on Instagram.

Zooey Deschanel’s post was flooded with sweet messages and comments from her fans. Her fans could not stop gushing about the happy couple.  But one comment caught the attention of her fans.

Zooey’s fans noticed that Jonathan Scott commented on this picture by stating, “May I have this…and all future dances?” This comment led to fans speculating that Zooey Deschanel is already engaged to her boyfriend Jonathan Scott. 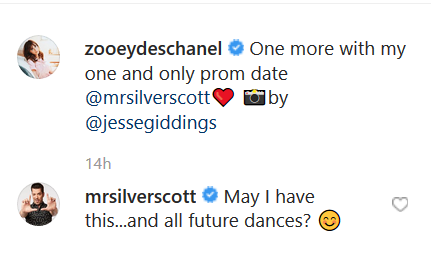 Check out how Zooey Deschanel’s fans reacted to this interaction between Zooey and her boyfriend Jonathan Scott. Take a look at these comments. 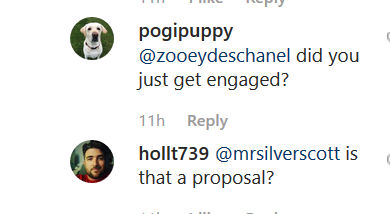 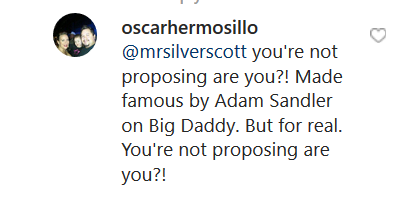 PEOPLE HAVE PLEDGED SO FAR
LATEST NEWS
View all
5 hours ago
Beyonce-jay z or jennifer lopez-alex rodriguez: who has set major couple fashion goals?
5 hours ago
Blake lively has a hilarious reaction after ryan reynolds' edited picture goes viral
2 hours ago
Hailey baldwin, justin bieber threaten to sue surgeon who claimed the model got a nose job
46 mins ago
Ashley benson and g-eazy spark dating rumors after being spotted together in malibu
2 hours ago
Ashton kutcher, mila kunis ready to sell their beverly hills home for $14 million: reports