As fans were keen on watching Ahan Shetty and Tara Sutaria starrer movie, Tadap, it was finally released today. Read these tweets before you book your tickets. 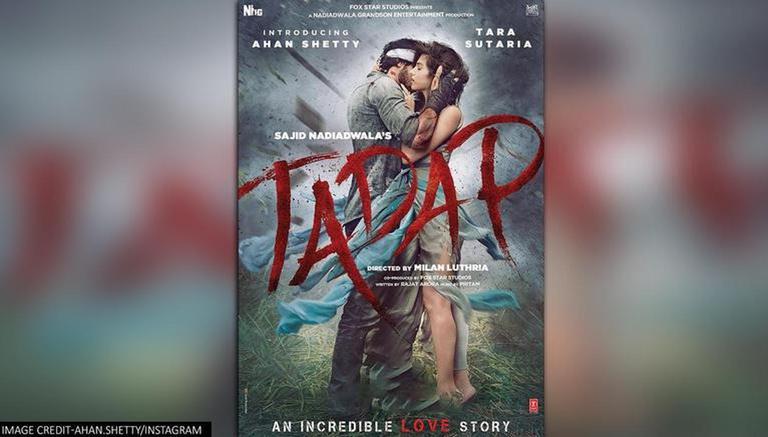 
Tadap is the much-awaited romantic action movie directed by Milan Luthria, and as the movie finally hits the theatres on 3 December 2021, numerous fans and celebrities have been sharing their reviews on social media whether they liked it or not.

The movie marks the Bollywood debut of Suniel Shetty's son and Athiya Shetty's brother, Ahan Shetty who will be seen featuring opposite SOTY2 actor, Tara Sutaria. The movie is a remake of the 2018 Telugu movie, RX 100.

As the movie hits the theatres today, the fans and celebrities have been dropping their Tadap review on social media and revealing whether they liked the film or not. Abhishek Bachchan took to his official Twitter handle and welcomed Ahan Shetty to the movies as he will be making his Bollywood debut with this film. he even wished the entire team of the film all the best and urged everyone to catch the film in the nearby theatres. Even filmmaker Sanjay Gupta took to Twitter after watching the film on the premiere night and hailed Ahan Shetty's performance. Adding to it, he also mentioned that his screen presence, intensity and performance were amazing making him a complete package.

Actor Esha Deol congratulated Ahan Shettyfor his debut and mentioned that his performance in the film was awesome. Even Arjun Rampal attended the Tadap movie premiere post which he took to his Instagram handle and hailed the auspicious start for the charming, endearing and fierce, Ahan Shetty. He even congratulated him for his debut and gave a shout-out to the female lead of the film, Tara Sutaria. Take a look at some of the reactions-

Scored a century on debut…filled with exciting stroke play. Well played, Ahan Shetty. A star is born. May you have a long and fulfilling career.
Congrats, @SunielVShetty 😊🤗 #Tadap #AhanShetty pic.twitter.com/NKIAB8urBh

Tadap has been getting mixed reviews from the netizens. While a user was all praises for the Ahan Shetty-starrer, another user seemed to have not liked it enough. See reactions here:

If you don't have acting skills or dialog delivery, just rip off your t-shirt. Seems like new Bollywood formula... #Tadap #TadapReview

Ahan Shetty and Tara Sutaria starrer film has an IMDb rating of 8.4 so far.