The BTS Army was delighted when they recently managed to spot BTS Suga in some viral pictures of a football match while the singer was sitting with his mask on. 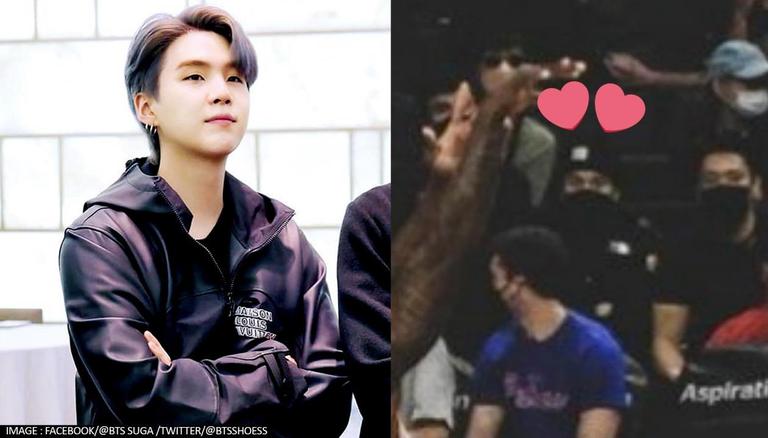 
As BTS Suga recently kept a low profile and attended a football match, the Army did not miss out to spot him in the audience and making the pictures viral. The singer was seen enjoying the football match while wearing a mask and a cap in order to keep his presence a secret.

Many of the Army members expressed their delight at spotting him in the audience while others asked the fans to respect his privacy and not spread the pictures.

BTS Suga at a football match

One of the BTS Army members recently took to his Twitter handle and dropped in a couple of pictures from a football match and revealed how they managed to spot one of the BTS members, Suga in the audience. In the first picture, he added a glimpse of the audience sitting while in the next one he added a close-up image of BTS Suga and dropped in hearts around him to let others spot him in the picture. The BTS Army member added more pictures depicting how BTS Suga was enjoying the football match in an all-black look while trying to keep his presence low key.

On the other hand, Farbod Esnaashari, a football writer, reshared these pictures on Twitter and revealed that BTS Suga was at the Clipper game and added that he kept it low-profile. He also mentioned how he received a chance to say hello to him at halftime and stated that it was an incredibly unexpected and cool moment. In another tweet, he revealed that BTS Suga was in a North Face jacket and wore a beanie and a mask. Adding to it, he revealed how nobody recognised him during the game and only the Clipper staff were aware of his presence and they knew hours before tipoff that he was arriving. Furthermore, he mentioned how surreal it was to see a superstar in public not being bothered. Sharing more details, he also revealed that he was sitting in Section 111.

Suga from BTS was at today's Clipper game. He kept it very low profile, but I had the chance to say hello at halftime. Was a very incredibly unexpected and cool moment today.

He was in a North Face jacket, wore a beanie and mask. Don't think I saw anyone recognize him. The only people that knew it was him were Clippers staff, because they knew hours before tipoff that he was coming. Very surreal to see a Superstar in public without being bothered.

This was where he was sitting. Section 111. I'm telling y'all he was super low key

Many from the BTS Army were glad to see BTS Suga not being bothered by anyone while others dropped in more pictures of him from the game. Many of them also stated how happy they were to see BTS Suga enjoy the game and thanked the Twitteratis for being discreet about his presence during the game. Take a look at some of the fans reactions to BTS Suga's viral pictures from the football match.

Thank you so much for being so respectable and not releasing any photos of him inorder to prevent his privacy... I'm so glad he was able to enjoy the game cause he really likes basketball a lot. #BTS #BTSARMY

Thank you for being so respectful and mentioning about it only after the game and without any photos. I am so glad that he enjoyed the game without any spotlight. We really appreciate it.

Thank you for telling us 😭😭

Those people around him didn’t know they’re in the presence of greatness. All they’ll know that their life will be forever blessed and they don’t even know why. 😁💜

READ | Suga's Quiz: Answer these questions and find out how well do you know BTS' beloved rapper
First Published: 28th November, 2021 08:04 IST
SUBSCRIBE TO US

WE RECOMMEND
BTS officially applies to defer military service: How does their future depend on it?
BTS' RM reacts to James Corden clarifying the joke that got him in 'hot waters' with ARMY
JoJo Siwa bumps into BTS' '7 legends' at the American Music Awards 2021
BTS' V becomes Japan's top celebrity, dominates ranking for 33 consecutive weeks
BTS members drop snaps from their US trip; say 'We're leaving. Gonna come back soon'