Katy Perry took to her Instagram to share a bunch of pictures with husband Orlando Bloom who is celebrating his 44th birthday today. Check out the post here.

Singer Katy Perry took to her Instagram to wish her husband Orlando Bloom. While sharing a bunch of photos of them, she wrote about how much she loves him in her caption. The caption reads, "Happiest 44th to my love, brilliant father of my Dove & a shimmering mirror that sees and reflects to me what I can’t yet see...Thank you for always going back down to the mat with me and never tapping out...So glad my moon found it’s sun, love you whole world doe".

On Orlando Bloom's birthday, she added the location of the post as, "God sent me an Angel from the Heaven above" to appreciate his presence in her life. The fans flooded her comment section with birthday wishes for Orlando Bloom. Some of them even wrote, "Happy Birthday Dad", whereas others complimented the couple.

Also Read: Katy Perry reveals she used to pretend to be Zooey Deschanel at start of her career 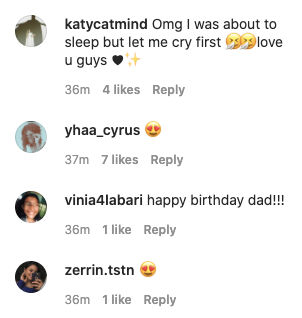 Katy Perry and Orlando Bloom met for the first time at Golden Globes After Party in 2016, according to brides.com. They immediately hit it off and dated for a year before calling it off. The couple came back together and Orlando proposed on Valentine's Day with a ruby engagement ring.

Katy announced her pregnancy on March 4, 2020, in her music video Never Worn White. She wore different dresses throughout the video but at the end of the video, she is seen wearing a white transparent dress while revealing her baby bump. Her fans flooded her social media with congratulatory messages. Katy gave birth to their first daughter on August 24, 2020, and named her Daisy Dove Bloom. Earlier, she was married to Russel Brand in 2010. They had a private ceremony in Ranthambore sanctuary according to BBC news and they called off their marriage in 2012.

After giving birth to Daisy, Katy Perry released her album Smile on August 28, 2020. The song of the album Daisies received over 25 million views on YouTube. On December 18, 2020, she released the song Not the End of the World which was a part of Cosmic Energy compilation. In the music video of the song, she paired up with Zooey Deschanel who is said to be Katy's twin.

Also Read: Katy Perry reveals she used to pretend to be Zooey Deschanel at start of her career