Polish Ministry of Culture said in that one of world's most iconic composers Krzysztof Penderecki died of “long, serious illness” at the age of 86 on March 29.

One of the world’s most iconic composers, Poland’s Krzysztof Penderecki has died on March 29 at the age of 86. Polish Ministry of Culture said in a tweet that Penderecki died of “long and serious illness”. He was widely applauded for his film scores including for William Friedkin’s The Exorcist, Stanley Kubrick’s The Shining and David Lynch’s Wild at Heart, and also for his Threnody for the Victims of Hiroshima and the largely atonal St Luke's Passion. The four-time Grammy award winner received his most recent honour in 2016 for best choral performance.

The Vice President of Poland’s Council of Ministers, Piotr Glinski called it “Polish culture’s great and irreparable loss” and hailed the composer for his music being loved from people in the United States to Japan. While offering his condolences to Penderecki’s family and friends, Glinski said the Polish music artists drew on the rich heritage of the country’s culture and gave a universal dimension to the same. 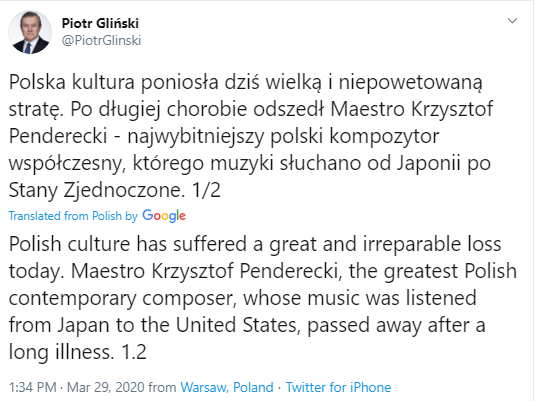 Read - Poland Govt In Quarantine After Minister Diagnosed With Virus

Soon after the news was announced by Polish media, tributes pour in from the world and many people took on Twitter to bid ‘farewell’ to one of the “truly great composers”.

Very sad news arrived from Krakow today! In the morning at the age of 86, the outstanding Polish composer Krzysztof Penderecki died.#KrzysztofPenderecki pic.twitter.com/XdpTOXG4Wb

Today in the morning, at the age of 86, Polish composer Krzysztof #Penderecki died.

In 2012 @guardian called him "probably the greatest living Polish composer".

He left hundreds of his unique compositions in which he will continue to live..

I used to live in Hiroshima, and his Threnody for its victims means a lot to me, with its clustering, its slapping, its highly organised haphazardness, its strangeness. pic.twitter.com/ZfJ2fVRjpJ

One of the truly great composers has left us: Krzysztof Penderecki. He was 86. His wild, terrifying, and imaginative music has soundtracked horror classics from The Shining to The Exorcist and inspired many modern filmmakers and musicians, from David Lynch to Radiohead. A master. pic.twitter.com/n3PgSEUCAE

Farewell to the genius composer Krzysztof Penderecki. I still remember the first time I heard Polymorphia on @BBCRadio3 in the late 1970s and it blew my mind! Time to listen back to his work today.https://t.co/CYkPVIkCnC pic.twitter.com/nJYctnNfn8

PEOPLE HAVE PLEDGED SO FAR
LATEST NEWS
View all
23 hours ago
Euphoria's Palash Sen comes up with one-minute song starring son Kinshuk, shares teaser
14 hours ago
George Floyd's demise is the reason Ice Cube did not show up on GMA, apologizes to fans
16 hours ago
'Totta' remix: Sonu Nigam and Kainaat Arora get groovy in this peppy track; Watch video
1 day ago
Review: John Prine sideman steps out as reflective balladeer
19 hours ago
BTS' Suga surprises fans with guide version of Jungkook's 'Dear My Friend' from D-2