Taylor Swift’s team recently responded to accusations of her stealing logo of a Black designer for folklore album. Read here to know what her team had to say.

Taylor Swift's team recently responded to accusations where it was reported that she stole the folklore merch logo from a Black designer. Her team issued a statement to a media portal and responded to Amira Rasool's accusations. In the statement, the team expressed that they were recently made aware of using the word 'the' before folklore album on some of the album's merchandise was a concern.

Read Also | Taylor Swift's 'folklore' Explained: The Meaning Behind All The Songs In The Album

Amira Rasool, who owns the title, later took to her Twitter and expressed her gratitude towards Taylor Swift and her team for resolving the issue. In her tweet, she wrote, "I commend Taylor's team for recognizing the damage the merchandise caused to my company @TheFolklore's brand. I recognize that she has been a strong advocate for women protecting their creative rights, so it was good to see her team is on the same page." Take a look at it here.

It was reported that the owner of The Folklore brand is a company that exclusively sells goods that hail from Africa and sells goods through its website. Amira first expressed her concerns that Swift's merch logo had a striking resembles her own products with a tweet and an Instagram post. On July 24, she tweeted, "Wait hold up. Taylor Swift, it's one thing to use the name "Folklore," but we're out here stealing Black women's logos too?". Take a look at the tweet here. 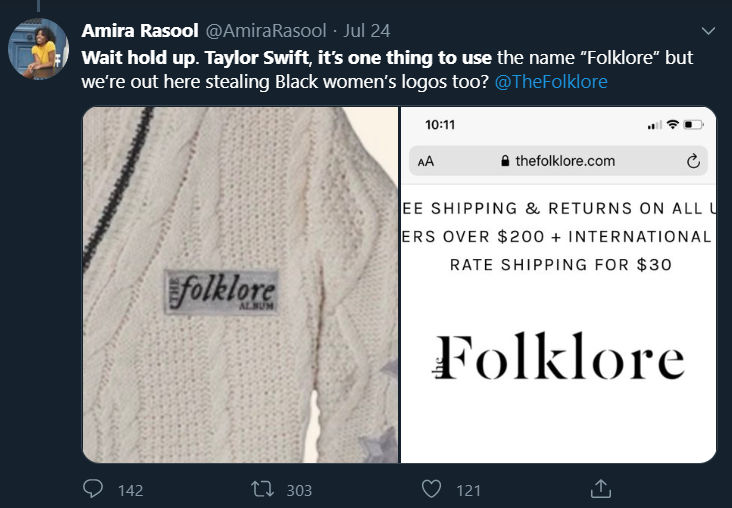 Amira Rasool in her Instagram post had posted a similar picture to get the attention of Taylor and her team. In the caption of this post, she had expressed how she is sharing her story to get the attention of large companies and celebrities who have been copying the work of small and minority-owned business owners. She also expressed that she will not allow brands and celebs to do such kind of 'theft'. Take a look at the post here.

Read Also | Did Taylor Swift And Joe Alwyn Break Up Or Is It Just A Rumour?

It was also reported that after the issue was solved, Rasool and Taylor's lawyers were communicating with each other to take the necessary next steps to make things right. Taylor also had responded to the brand owner via Twitter on Thursday, July 30. She wrote, "Amira, I admire the work you're doing and I'm happy to make a contribution to your company and to support the Black in Fashion Council (launching on 8/3) with a donation [heart emoji] @thefolklore @amirarasool @bifcglobal #blackinfashioncouncil." Take a look at it here.