AR Rahman's Daughter Posts Pic After Spat With Taslima Nasreen Over Burqa; Won't Back Down

AR Rahman's daughter Khatija posted family pic 'away from suffocation' after spat with Taslima Nasreen on her burqa feeling 'suffocating'. Celebs backed her too

AR Rahman’s daughter Khatija Rahman got dragged into a row after Taslima Nasreen stated that she felt ‘suffocated’ looking at the youngster in a burqa. The former asking the Bangladeshi writer-activist to get some ‘fresh air’ while adding that she feel empowered by her choice of attire made headlines. After the controversy, Khatija took another dig at the Nasreen by sharing her first pic with AR Rahman in a year, and wrote how it was a ‘’peaceful time’ with the family ‘away from the suffocation.’

In the throwback post, Khatija is seen posing with AR Rahman and her sister Raheema. She also added hashtags like ‘living my life' ‘being away from negative people', ‘boss life', ‘boss lady' and more.

Earlier, Raheema Rehman had also quipped how she was not wearing a veil, sharing the same snap.

Meanwhile, celebrities also stood up for Khatija. Aishwarya Lekshmi, Kaveri Kapur and Chinmayi Sripaada were among the celebrities who lauded her for her statement. 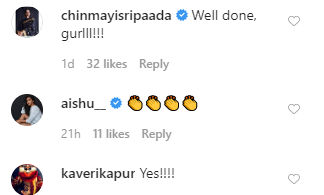 Chinmayi also tweeted that Khatija should be left alone for her choice of wearing a burqa. The singer added that it was not different from shaming a girl for wearing short clothes.

Also - it’d be nice of people leave Khatija Rahman alone for her choice to wear the Burqa.

I don’t see it as any different from shaming a girl that wears short clothes.

Taslima Nasreen, who lives in India and has been in exile from Bangladesh since 1994, had written that she loved Rahman’s music, but felt suffocated watching his daughter in a burqa. She added that it was ‘depressing’ to know that educated women in cultural family get brainwashed easily. Previously, she had also slammed Zaira Wasim for quitting films for religious reasons.

READ: AR Rahman's Daughter Gets Into A Social Media Spat With Taslima Nasreen Over Burqa

Sharing a screenshot of Nasreen’s tweet, Khatija wrote how people were only bothered about a woman’s attire when so much was going on in the country. She wrote how the topic raged her, while sharing that she had found a different version of herself in the last year.

She said that not suffocated, but she felt proud and empowered about what she stood for. Khatija urged the writer to Google up feminism, which she said did not mean putting another woman down or bringing their father into the issue. She also quipped that she did not recall sending any personal photos to her for her perusal.

Been only a year and this topic is in the rounds again..there’s so much happening in the country and all people are concerned about is the piece of attire a woman wants to wear. Wow, I’m quite startled. Every time this topic comes the fire in me rages and makes me want to say a lot of things..Over the last one year, I’ve found a different version of myself which I haven’t seen in so many years. I will not be weak or regret the choices I’ve made in life. I am happy and proud of what I do and thanks to those who have accepted me the way I am. My work will speak, God willing.. I don’t wish to say any further. To those of you who feel why I’m even bringing this up and explaining myself, sadly it so happens and one has to speak for oneself, that’s why I’m doing it. 🙂. Dear Taslima Nasreen, I’m sorry you feel suffocated by my attire. Please get some fresh air, cause I don’t feel suffocated rather I’m proud and empowered for what I stand for. I suggest you google up what true feminism means because it isn’t bashing other women down nor bringing their fathers into the issue 🙂 I also don’t recall sending my photos to you for your perusal 🙂