Social media has been abuzz with reactions to the Indian government's decision to ban 59 Chinese apps from Indian cyberspace citing national security.

After the Indian government made its unprecedented move against China with the nationwide ban on the use of Chinese apps on smartphones, many celebratory reactions have been pouring in on social media. The action taken by the Home Ministry late on Monday follows the outrage amid the ongoing India-China standoff at the Line of Actual Control (LAC) at Galwan Valley in Ladakh. Many film celebrities have also reacted to the news and expressed their thoughts over it on social media. 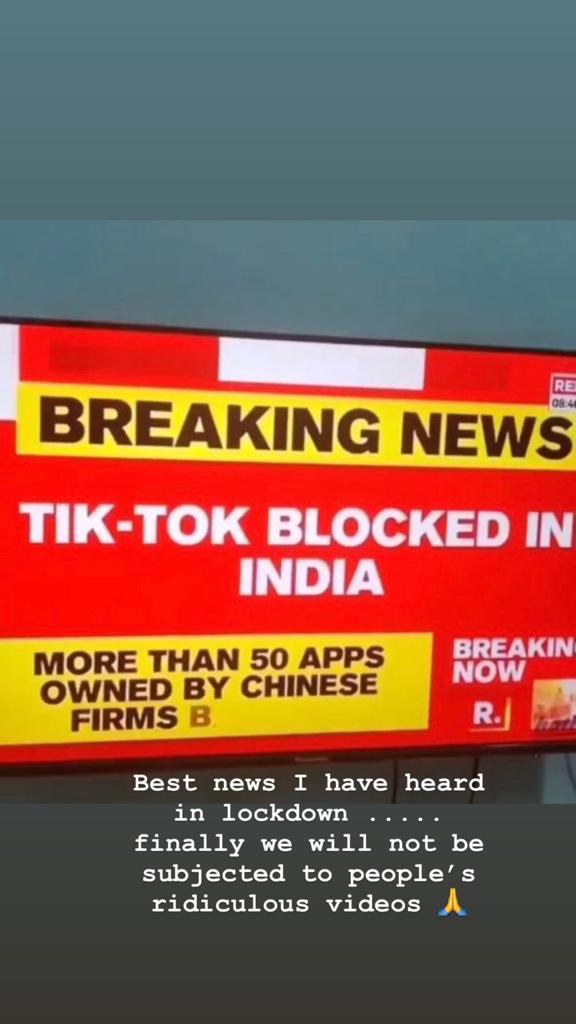 While Mirzapur actor echoed Farah Khan Ali's thoughts, Gully Boy fame Vijay Varma, who had been an ardent Tiktok fan, took to Instagram and shared that people have been congratulating him since the news has been declared. He joked that he had wished for TikTok ban 'too hard'. He wrote, "Thank you for all the congratulatory msgs but I didn’t ban tik-tok. I just wished it too hard. ðŸ˜‚ Now I hope we find better ways to express ourselves and our creativityðŸ˜ˆ #tiktokban".

There seems to be a distaste for the popular video making app TikTok among people reacting to its ban. In India, the app was briefly banned in April 2019 by the Madras High Court for hosting 'pornographic and sleazy' content. Recently millions of Indian users had also millions of Indians called for a ban on the app after videos promoting violence against women went viral, with NCW chief Rekha Sharma seeking a total ban on it.

Within hours of being banned by the Indian Government along with 58 other China-origin apps, TikTok India on Tuesday has issued a statement. Nikhil Gandhi, Head of TikTok India, has said that the app is in the process of complying with the government's 'interim order'.

"We have been invited to meet concerned government stakeholders for an opportunity to respond and submit clarifications. TikTok continues to comply with all data privacy and security requirements under Indian law and has not shared any information of our users in India with any foreign government, including the Chinese government," the statement reads. "Further we are requested to in the future we would not do so. We place the highest importance on user privacy and integrity," it added.

LATEST NEWS
View all
2 days ago
Dr Dre net worth: Know how the American rapper made a spectacular life for himself
2 days ago
Why was David Duke banned from YouTube? Read the reason behind YouTube's decision
21 hours ago
Are Leida and Eric still together? Find out the status of this '90 Day Fiancé' couple
2 days ago
Why was Richard Spencer banned from YouTube & will he return to the platform?
2 days ago
TikTok banned In India: Jannat Zubair & Ashnoor Kaur in favour of the ban on Chinese apps