The International Film Festival Of India used Gulzar's picture along with a synopsis that spoke about the late Satyajit Ray making a massive mistake. Read below

Gulzar and Satyajit Ray are two of the most prominent personalities of all time. However, there was a major good up revolving around the two of them. The International Film Festival Of India used Gulzar's picture along with a synopsis that spoke about the late Satyajit Ray. The website, however, spoke about Ray's Bengali dialect film Ganasgatru and his achievements. IFFI is celebrating its 50th year and it is one of the biggest film festivals around the world that brings the best works together. Take a look at the screenshot below- 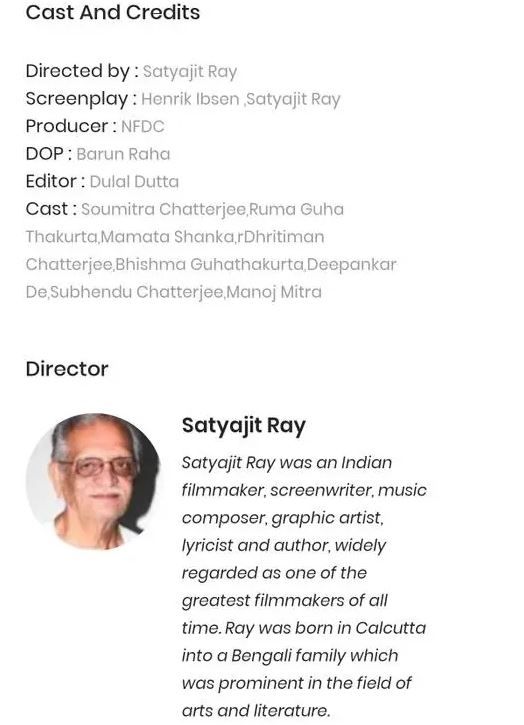 The International Film Festival of India (IFFI) was hosted this year in Goa. The guest list had some big names from the Indian film industry like Amitabh Bachchan, Rajinikanth, Karan Johar, and many more. During the inaugural ceremony of IFFI 2019, Amitabh Bachchan was felicitated along with Rajinikanth.

#IFFI50 LIVE
The Stalwarts of Indian Cinema, @SrBachchan & @rajinikanth are back together at the @IFFIGoa Red Carpet again, after their appearance at IFFI 2014. #IFFI2019 #AmitabhBachchan #Rajinikanth pic.twitter.com/e29TtPudna

Rajinikanth had been awarded the Icon of Golden Jubilee of IFFI for his contribution to cinema. While sharing the stage with Amitabh Bachchan, the South Indian superstar spoke about his equation with him and also the piece of advice he was given earlier in life by the latter. Amitabh's advice was that one should remain busy even after they are 40 years old. One should do what they want and not be bothered by what others say. He then went on to say that Amitabh Bachchan is his biggest inspiration and also a good friend. Both of them are reportedly in touch with each other. Adding to this, Rajnikanth, also known as "Thalaiva," said that he does not take acting as a burden. He has reportedly finished shooting Darbar and will soon begin shooting for his next film.

READ: IFFI 2019: All You Need To Know About The Schedule Of The Festival

PEOPLE HAVE PLEDGED SO FAR
IFFI 2019: All you need to know about the schedule of the festival
Priyadarshan unhappy with the contents of IFFI 2019?
IFFI 2019 pays homage to 13 film legends whose films will stand the test of time
International Film Festival of India confuses Satyajit Ray with Gulzar
Rajnikanth at IFFI: Amitabh Bachchan biggest inspiration
Nayanthara and Vignesh Shivan's net-worth will leave you spell-bound
Vijay Sethupathi reveals the second poster for 'Laabam' on his birthday
Blackpink's Lisa opens up about her love for her group members
DO NOT MISS
AL-SALBI NAMED NEW ISIS CHEIF
PM MODI, NEPALESE COUNTERPART INAUGURATE CHECK POST AT JOGBANI-BIRATNAGAR
KEJRIWAL VS WHO AGAIN
BJP MLA OPPOSES MUMBAI 24X7
AAP TAUNTS BJP AFTER CANDIDATE LIST
LIFE INSURANCE FOR NRI IN INDIA