Anaswara Rajan of 'Thanneermathan Dinangal' fame recently was slammed by the netizens for wearing a dress. Later, Mollywood actors started an online movement.

Actor Rima Kallingal was one of the first Mollywood celebrities to slam the trolls. She shared a picture in her beachwear, and wrote: "Surprise surprise!!! Women have legs." (sic) Later, actor Nazriya Nazim too shared a photo with her partner Fahadh Faasil online and wrote: "#legday." (sic)

On the other hand, Luca (2019) fame Ahaana Krishna slammed the trolls, and wrote, "Me posting a picture in a super short dress has only 1 meaning - I like that picture and I felt like sharing it on my own social media profile." (sic) She further added, "Any other meaning that you derive out of it is nothing but a reflection of the unfortunate situation of your life and the things you lack in it." (sic) Parvathy also shared a picture on her Instagram stories wearing shorts, and wrote: "Yas We have Legs." (sic) 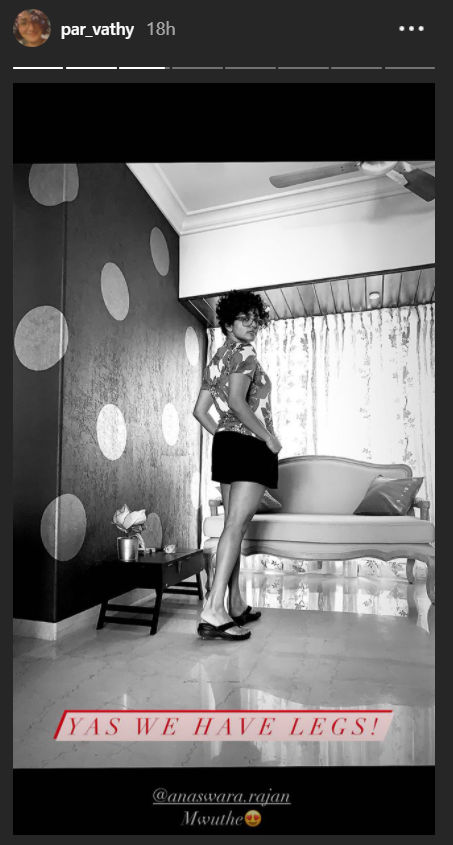 Also Read | Nazriya Nazim Pens A Note For Fahadh Faasil Who 'owns Her Heart' On His Birthday; Read

On Saturday, September 12, Anaswara Rajan shared a photo from her latest photoshoot online. The picture that had Anaswara Rajan in shorts enraged many social media users who hurled abuses at the actor for wearing a short dress. "This comment section kind of proves our pathetic stone age culture. Somehow Malayali raves to be progressive and better than the other states. A girl child wear shorts and cold shoulders, they go into a culture shock," (sic) wrote a social media user slamming the trolls who attacked the actor.

Also Read | Nazriya Nazim Pens A Note For Fahadh Faasil Who 'owns Her Heart' On His Birthday; Read

Meanwhile, on the work front, Anaswara Ranjan will be next seen in Kavya Prakash's Vaanku. The movie, starring Aanswara Ranjan in the lead, also features actors like Vineeth, Joy Mathew, Major Ravi, others in prominent roles. Besides the upcomer, Anaswara Rajan is expected to resume work on  Girish A D's Super Sharanya soon. The movie also stars Arjun Ashokan in the lead.