Anaswara Rajan has recently given a bold reply to trolls on Instagram. Many Instagrammers had earlier abused her for wearing short clothes. Read on.

Young South Indian actor Anaswara Rajan recently shared a series of pictures wearing a pink top and denim shorts. The actor posted these images on her Instagram handle after netizens allgedly abused her for wearing short dresses. Anaswara has now retaliated trollers with a powerful post. Read on to know more about the whole story:

A few days ago, Anaswara Rajan shared pictures on Instagram and received plenty of abuses in the comments section. People strongly advised her to stop posting photographs in short clothes. While many jingoistic commenters flooded the image, some also backed Anaswara. And to answer netizens, Anaswara posted two photos in a short dress with the caption, “Don’t worry about what I’m doing. Worry about why you’re worried about what I’m doing... (sic)”.

Her reply was even applauded by many of her followers. One follower wrote, “The caption says it all! You go girl (sic)”.  The other fan wrote, "On point. Love you". The third user wrote, ''You go girl! Need more of you". The picture had gone viral with lakhs of double-taps and comments. Take a look at the fans reaction on Anaswara Ranjan's recent post. 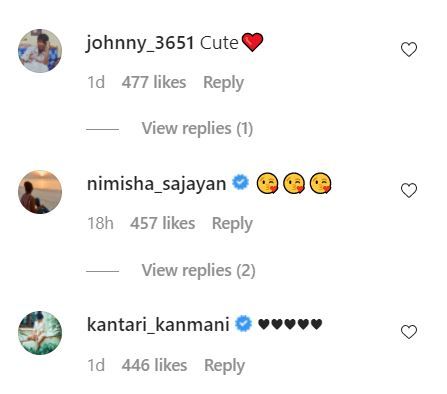 18-year-old actor Anaswara Rajan is known to have played many memorable roles in movies such as Thanneer Mathan Dinangal, and Udaharanam Sujatha. It was in the film Udaharanam Sujatha that Anaswara made her acting debut three years ago. The film featured Manju Warrier in the lead role in which Anaswara portrayed the role of a rebellious teenage daughter.

Anaswara Rajan has many upcoming films in her kitty. Some of the movies include the Trisha-starrer Raangi, Vaanku, and Super Sharanya. In comparison, Vaanku is based on a story by Unni R and is co-produced by Shimoga Creations, 7 J Films, and Trends Ad Film Makers. Anaswara Rajan’s next film titled Super Sharanya will be the second collaboration of Anaswara with director Girish AD, who made the hit film Thanneer Mathan Dinangal.