Swastika Mukherjee recently took to her Twitter handle and shared glimpses of her look from her upcoming movie, 'Guldasta'. See post.

Swastika Mukherjee, who recently featured in Dil Bechara recently took to her Twitter handle and shared a few glimpses of her amazing look from her upcoming movie, Guldasta. Take a look at what the actor shared on her Twitter handle.

Glimpses of Dolly Bagri from ‘Guldasta’

Some glimpses of #DollyBagri from my film #Guldasta all set to release on 21st October #DurgaPuja2020 in theatres.
The joy of seeing myself on big screen after so long is a different feeling altogether.
Wear your masks and watch the film #OnlyInTheatres pic.twitter.com/cUGrGeUwRX

Swastika Mukherjee gained popularity with her latest Bollywood movie, Dil Bechara. She was also a part of the famous web series, Paatal Lok. The actor recently gave a sneak peek of her looks from her upcoming project, Guldasta. She will be essaying the role of Dolly Bagri in this movie.

In her recent tweet, she mentioned that her movie Guldasta is all set to release in theatres on October 21. She urged her fans to wear masks while watching the movie as it will be released only in theatres. She also shared her feelings and said that the joy of seeing herself on the big screen after a long time was a completely different feeling altogether.

Swastika Mukherjee shared a few pictures of her different look from the shoots of Guldasta. She can be seen essaying the role of an aged woman along with the other two female actors in the movie. Her fans took to their Twitter handles and mentioned how much they loved her new look from the movie. See how fans made Swastika’s day by showering lovely compliments on her recent post. 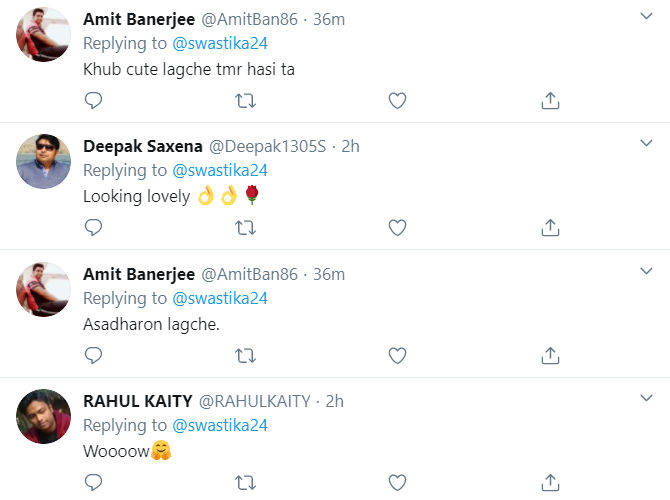 Directed by Arjun Dutta, Guldasta is a female-oriented Bengali movie all set to be released in theatres on October 21. The plot is about three female leads whose life journey is portrayed in the movie by actors Arpita Chatterjee, Swastika Mukherjee and Debjani Chattopadhyay. Other cast members include Anuradha Mukherjee, Ishaan Mazumdar, Anubhav Kanjilal, Abhijit Guha, to name a few.

Swastika has majorly worked in the Bengali movie industry and has been a part of a couple of Hindi projects. Some of her movies include Kiriti Roy, Take One, Jaatishwar, Shah Jahan Regency, Maach Mishti & More, Ami Aar Amar Girlfriends, Basanta Utsav, Mumbai Cutting, Bye Bye Bangkok, Detective Byomkesh Bakshi, Hello Kolkata, Hemantar Pakhi and many others.

Also Read From 'Tanhaji' To 'Kedarnath', Films Re-releasing In Theatres After October 15 Announced