Anushka Shetty has been missing from the big screen for a while, with no major releases in 2019,  and her personal life hogging the limelight more. While reports of her marriage are doing the rounds, with the actor denying it, her professional life is coming to the fore again. The trailer of her next film, a mystery thriller, Nishabdham, hit social media on Friday and impressed her fans.

READ: Anushka Shetty's Nishabdham Will Feature Her In A Lead Role After A Gap Of 2 Years

The trailer features Anushka in an intense role surrounded by mysterious happenings in a ‘haunted’ house. Her character is shown as speech-impaired in a hospital after what looks like an accident, while other characters try to get into the bottom of the story.  She is in love with Madhavan, who plays the role of a musician, but he too becomes a part of the chaos.

Apart from the ‘supernatural’ events, there is also the involvement of police officers and some intense action sequence follow.

While Manoj Bajpayee shared the Hindi version, the trailer of the Telugu version was unveiled by Nani, who termed ‘Sweety’s film as an ‘edge of the seat’ thriller.

READ:Nishabdham: Fans React To The Teaser, Call It 'intriguing'

Netizens too were hooked by the trailer, hailing the ‘Lady Superstar’, calling the film ‘Hollywood level’ and more.

Here are the reactions 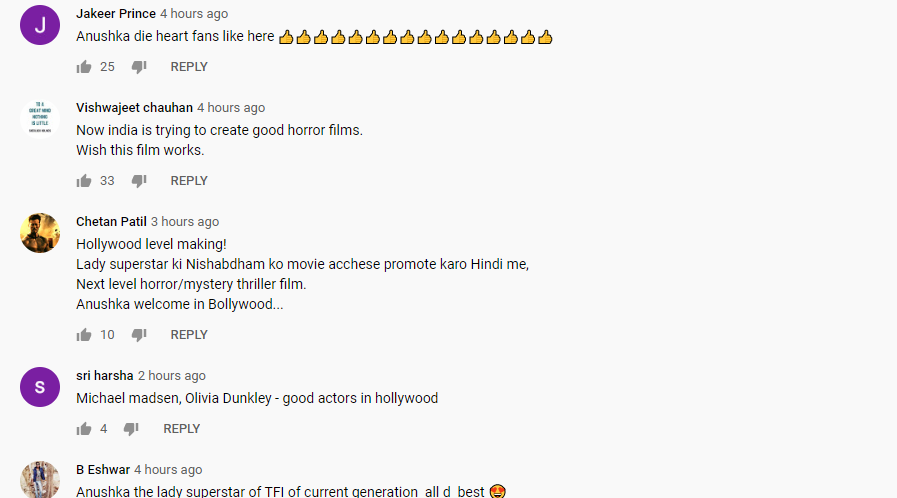