Rashmika Mandanna, in a recent QnA session on her social media, revealed that she is learning a new dialect for her upcoming film with Allu Arjun. Know more.

Rashmika Mandanna on Monday engaged in a fun QnA session with her fans on her social media. While many emphasised on her good looks, the others talked about her acting skills. Meanwhile, a fan's observation about Rashmika Mandanna's upcoming movie took her by surprise.

During the QnA session with her fans, a social media user asked Rashmika Mandanna whether she is learning a new dialect for her upcoming movie Pushpa. A surprised Rashmika answered, "Well yes how do you knowwwwww?" (sic). Reportedly, the actor will be learning Chittoor dialect for her movie with Allu Arjun, to be directed by Sukumar. 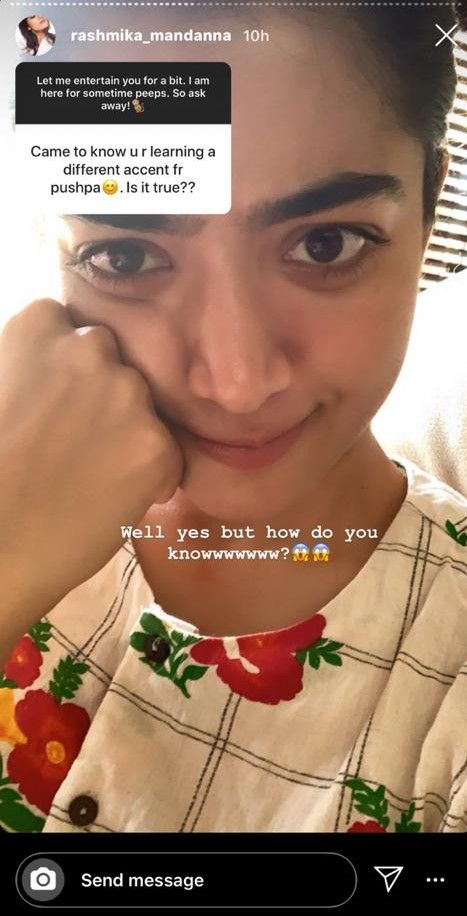 Also Read | Allu Arjun's 'Pushpa' To Not Have Rashmika Mandanna As His Love Interest? Details Inside

Pushpa, starring Allu Arjun and Rashmika Mandanna in the lead, is reportedly set against the backdrop of Nallamala forest smuggling. The Allu Arjun and Rashmika Mandanna starrer will go on floors soon after the lockdown ends. Recently, the makers released the first look poster of the upcomer, amping up the expectations of the moviegoers. Check out the first look of Pushpa:

Also Read | Rashmika Mandanna Tells Fans 'Its Okay To Sleep All Day, You're Not Alone' Amid Lockdown

What's next for Rashmika Mandanna?

Besides the Allu Arjun starrer, Rashmika Mandanna will also be seen in Bakkiyaraj Kannan's Sultan. Although nothing much about the film has been revealed, but reports have it that the movie will feature Karthi and Rashmika in lead roles. Meanwhile, reports also claim that actor Yogi Babu has been signed by the makers for a pivotal role in the upcomer. Thereafter, the actor is reported to start work on her production venture. Although nothing much has been revealed, however, reports have it that the actor will make an official announcement soon after lockdown ends.