Matrix co-creator Lilly Wachowski on Sunday rebuked Elon Musk and Ivanka Trump for referencing a quote from her film The Matrix to encourage his followers to 'take the red pill'. The cryptic tweet which seems to have been a reference to his own move of opening a Tesla factory in California, despite the looming Coronavirus pandemic has been met with flak from a number of leaders and celebrities.

Elon Musk and Ivanka Trump both seemingly referred to a pivotal scene in the film on their Twitter handle on Sunday, thereby earning sharp criticism from the film's co-creator Lilly Wachowski.

While there was no direct explanation included, Musk's intentions were clear as it comes just days after he pushed for reopening his Tesla manufacturing plant, in defiance of local shutdown orders, potentially endangering the lives of 1000s more in the vicinity.

Read: 'Matrix 4' production suspended in Berlin due to Coronavirus outbreak 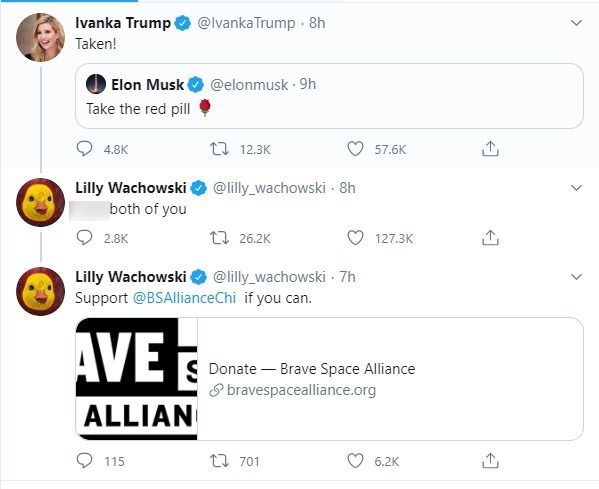 The scene from Matrix involves Morpheus (Lawrence Fishburne) revealing to an unaware Anderson played by Keanu Reeves, that he's been life completely oblivious that it's a computer simulation. He then goes on to offering him a choice between two distinct pills - red and blue - each with a different purpose. The blue pill will make him forget everything and continue living a normal life and the red pill will push him closer to the truth - which is his world really is the Matrix, aka prison for the mind.

Notably, Anderson takes the red pill and completes his transformation of the Matrix-battling hero that fans of the franchise have come to adore. According to the Urban Dictionary, Red pill signifies a free-thinking attitude, where one awakes from a normal life of blissful ignorance.

Retweeting the post, when First daughter and White House advisor Ivanka Trump responded to Musk's tweet, she stirred the pot further. Her comment added political connotations to the ongoing debate.

All of this added up to Lilly Wachowski to respond with an NSFW, yet succinct comment. As an added addendum, the director followed her tweet with a request to donate to Brave Space Alliance, an LGBTQ social services organization in Chicago.
Lilly Wachowski tweet

Support @BSAllianceChi if you can. https://t.co/rrDPOaaYED

Leading the number of worldwide cases of COVID-19 infection, the United States is currently the epicentre of the pandemic with 1,527,664 cases and 90,978 deaths at the time of this publication.

The World Health Organization (WHO) had declared the Coronavirus outbreak as a pandemic on March 11. At present, there are around 4,801,875 confirmed cases of COVID-19 infection across the globe and the disease has led to the death of around 316,671 people. In a ray of hope, around 1,858,170 people are also reported to have recovered.

PEOPLE HAVE PLEDGED SO FAR
LATEST NEWS
View all
1 week ago
Wong kar-wai to begin shooting for 'blossoms' in china from july
2 weeks ago
Are david dobrik and madison beer dating? former addresses dating rumours
3 weeks ago
Blake lively had major wardrobe malfunction in 'gossip girl' that went unnoticed
6 days ago
Bong joon ho to publish 'parasite: a graphic novel in storyboards' as film completes 1 yr
2 weeks ago
Fired from his job, angry employee rams ex-boss' ferrari with a truck