Television actor Arjun Bijlani took to social media to share some beautiful videos with wife Neha Swami as the lovely pair celebrate seven years of marital bliss recently. Arjun Bijlani shared a video which had a lovely collage of all their pictures. The video started with Arjun Bijlani and Neha Swami's wedding picture which was too endearing to behold.

Many of Arjun Bijlani's industry friends like Mouni Roy, Hina Khan, and Karan Tacker also wished the happy couple on the post. Take a look at Arjun Bijlani's post on the occasion of his 7th anniversary with Neha Swami. 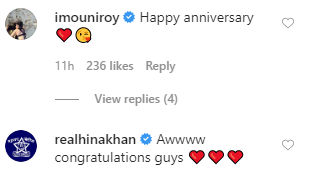 Arjun Bijlani spoke about the success of his web series, State Of Siege: 26/11

Arjun recently expressed his happiness on his recently released web series, State Of Siege: 26/11 being appreciated by the masses. He also spoke about it in an interview with an online portal. He said that it is ironic that the show has been received well because they were struggling with the release date and the series actually released at the time of the pandemic. He described it to be a surreal experience on being a part of the show and went on to congratulate the entire team including the producers, Abhimanyu Singh and Roopali Kadyan as well as the director Mathews on the success of the series. He added that the story had to be told and that he is glad that the masses are streaming and liking the series.