Varun Dhawan celebrated his birthday recently which was an intimate affair with family amid the ongoing COVID-19 lockdown. However, Varun Dhawan did not fail to make this day special for his fans as he interacted with them through a live video chat. Varun Dhawan also connected with comedian Bharti Singh on his live chat as they both are reportedly collaborating for a quarantined theme show.

This made Varun Dhawan blush during the live chat. However, the highlight of the conversation was when Bharti Singh revealed to Varun that her niece also gets jealous when she sees a picture of the Badlapur actor with his ladylove Natasha Dalal. Varun reportedly went speechless on listening Bharti Singh's revelation revolving around his girlfriend Natasha Dalal.

But, the actor also had a sweet gesture wherein she promised Bharti Singh that he would make sure to meet her niece once the ongoing lockdown ends. Check out a glimpse of Bharti Singh and Varun's conversation. 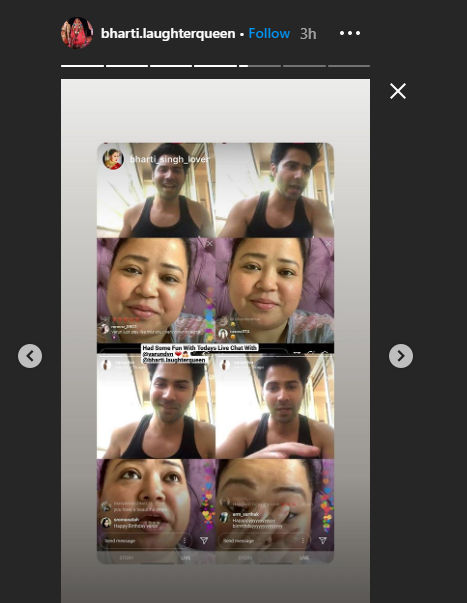 Talking about Varun and Natasha Dalal, the rumour mills were abuzz with the news that the couple were set to tie the knot  in June and that it was called off.  However, according to a report by a leading entertainment news portal, a source close to Varun Dhawan ridiculed even the possibility of a marriage between Varun Dhawan and Natasha Dalal this year.

The report also suggested that the wedding of Varun and Natasha was never planned to happen in June 2020, in the first place.

PEOPLE HAVE PLEDGED SO FAR
LATEST NEWS
View all
10 hours ago
Sara Khan opens up about her lip filler experiment, calls it a 'disaster'
6 hours ago
'Office Office' cast Then vs Now: See pictures of your favourite characters
3 hours ago
Ekta Kapoor confirms Rashami Desai was a “special appearance” in Naagin 4
11 hours ago
Hina Khan swears by this mantra for sweating it out in the gym
5 hours ago
Kasautii Zindagii Kay's Parth Samthaan draws flak from netizens for partying amid lockdown