Kartik Aaryan had this epic birthday wish for his sister from TV Czarina Ekta Kapoor. He asked for a sequel of her cult show Kasautii Zindagii Kay. Read On

Kartik Aaryan also revealed in the caption on how he ended up making a 'large biscuit' with K written on it while trying to make a small cake. Many of Kartik Aaryan's industry friends also left birthday wishes for Kartik Aaryan's sister. But it was Kartik Aaryan and TV Czarina Ekta Kapoor's banter which grabbed the attention. Ekta Kapoor left some heart emojis under the Love Aaj Kal actor's post.

Also Read: Kartik Aaryan Pledges Rs 1 Cr To PM-CARES; Says 'whatever I Am Today Is Because Of Fans' 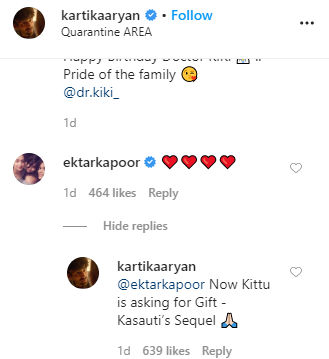 Kartik donated for the victim of the pandemic to PM-Cares

Kartik also joined the league of several Bollywood celebrities to come in aid of those who are at utmost need due to the ongoing coronavirus pandemic. The Pati Patni Aur Woh actor took to his social media recently to inform his fans that he will be donating Rs 1 crore to the PM- Cares Fund. Kartik was also lauded for this generous gesture. Take a look at the actor's post.