Paras Chhabra and Mahira made a fun video in which they enacted a scene from 'Bhabhi Ji Ghar Par Hai'. Fans in huge numbers gushed to drop comments on the clip

Former Big Boss 13 contestants, Paras Chhabra and Mahira Sharma have been time and again entertaining their fans amid the COVID-19 lockdown. The duo recently re-created a scene from the hit television show Bhabhi Ji Ghar Par Hai in a fun video. Paras Chhabra took to his Instagram and shared the clip, which burst an instant peal of laughter amongst fans. Check it out.

On Thursday night, Paras Chhabra took to his Instagram and shared a video in which he and Mahira Sharma are seen enacting a scene from Bhabhi Ji Ghar Par Hai. The funny clip in no time stormed the internet. Fans in huge numbers gushed to drop their comments on the duo's clip. They also praised their creativity amid lockdown. What stole the show was when Mahira Sharma while enacting a scene in the video says that she is 'set' and Paras in the Vibhuti Ji style explains to her by saying, "You don't call it set, but you call it, 'upset'". Check out the duo's fun video here. 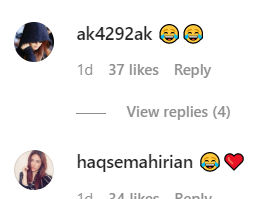 During their stint in Bigg Boss 13, fans swooned over Paras Chhabra and Mahira Sharma's endearing chemistry. The two collaborated for a music album titled Baarish, and the number has hit 18 million views online. Moreover, the duo also made headlines with their beautiful gesture of distributing food to the needy and underprivileged. Paras Chhabra shared a video on his social media wherein he along with Mahira Sharma can be seen giving food and the basic necessities to the needy.

Amidst lockdown, the former Bigg Boss 13 contestants Paras Chhabra and Mahira Sharma had also made it to the news when a wedding card of the duo had surfaced on the internet. This picture went massively viral and a lot of fans shared excitement about them tying the knot.

As per reports, the adorable couple is also all set to share the silver screen space together for an untitled Punjabi entertainer. Confirming the same, Mahira Sharma revealed that the news is true and she is excited to work with Paras once again, as she is super-comfortable working with him. Adding to the same, Mahira Sharma also shared that they will have great fun shooting the film.

PEOPLE HAVE PLEDGED SO FAR
LATEST NEWS
View all
17 hours ago
'Heartbroken' Sara Khan pens open letter to media for twisting her 'innocent statements'
17 hours ago
KBC's first crorepati Harshvardhan Nawathe had become the CEO of an MNC; Read details
16 hours ago
'Ramayan': Vindu Dara Singh shares interesting story on how his father was cast as Hanuman
16 hours ago
'Ramayana' star Dipika Chikhlia Topiwala aka Sita reveals her real-life Ram; See pic here
14 hours ago
Ekta Kapoor's wish for Surbhi Jyoti on her 32nd birthday has a 'Naagin' twist