Mahira Sharma-Paras Chhabra Give Food To The Needy; Jay Bhanushali Calls It A 'PR Stunt'?

Bigg Boss 13 contestants Mahira Sharma and Paras Chhabra recently joined hands to distribute food to the needy and underprivileged. Check out the video.

Also Read: Paras Chhabra & Mahira Sharma Of 'Bigg Boss 13' To Star In A Punjabi Film Together 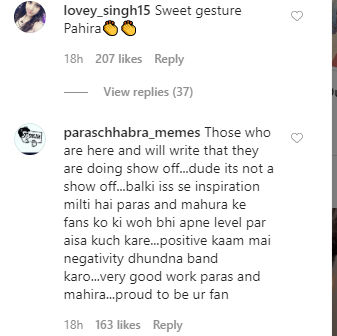 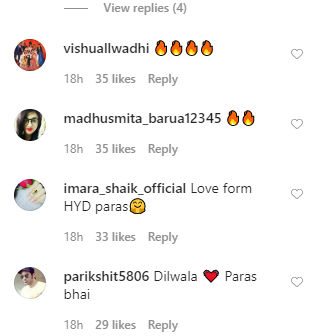 However, Paras' video also received some mixed reactions wherein some people called it 'flaunting' and reportedly TV actor Jay Bhaushali was also one of them. Jay's cryptic tweet was being touted to be an indirect taunt towards Paras and Mahira. When Jay started receiving backlash from the 'Pahira' fans, his wife Mahi Vij defended him by lashing out at the trolls on Twitter. Mahira Sharma also went on to clear this matter. The Bigg Boss 13 contestant wrote that many people will think that they are just 'showing-off' with this video and that they respect their opinion. Check out Jay Bhanushali and Mahi Vij's tweet.

Sorry to say but distributing food to needy has become a PR stunt for lot of so called actors..if you really want dua/blessing from them or God pls leave you phones home..could see ppl not being comfortable with cameras around. #COVIDIDIOT #lockdowneffect #HumanityFirst

Losers we didn’t even know wt PAras was doing so shut your mouth bdw thank u for telling us ...

Mahira Sharma also added that even she believes that donation should be something that comes from within the heart and that there should be no evidence of it. However, the Bigg Boss 13 contestant also added that the motive behind this was to motivate people and do in their bit for the people in these trying times.

Also Read: Paras Chhabra Reveals He Has Blocked Akansha Puri, But Has Mahira Sharma On Speed-dial

PEOPLE HAVE PLEDGED SO FAR
LATEST NEWS
View all
21 hours ago
Nitish bharadwaj on why 'vishnu puran' is much more relevant than darwinism
1 day ago
Fx renews 'what we do in the shadows' for third season
23 hours ago
Television actor ashiesh roy hospitalised; seeks financial help from salman khan
1 day ago
Anusha dandekar unleashes her hidden talent, releases cover of 'selfish'; watch video
1 day ago
'shaktimaan' mukesh khanna says tiktok for 'useless' people, adds, 'it spreads obscenity'