Prince Narula took to Instagram and asked fans to pray for his speedy recovery as he completed 6th day in the hospital after being diagnosed with dengue.

On October 15, Prince Narula took to his Instagram story and asked fans to pray for his speedy recovery. The Roadies Revolution host revealed that it's been 6 days since he has been in the hospital. Prince also shared a picture of his hand with a syringe on it.

'Pray for us, so that we are fine as soon as possible', he wrote in Hindi. Prince's wife, Yuvika, took to her social media on October 12 and shared that they have been diagnosed with dengue. More so, the date also marked to be the duo's 2nd wedding anniversary. 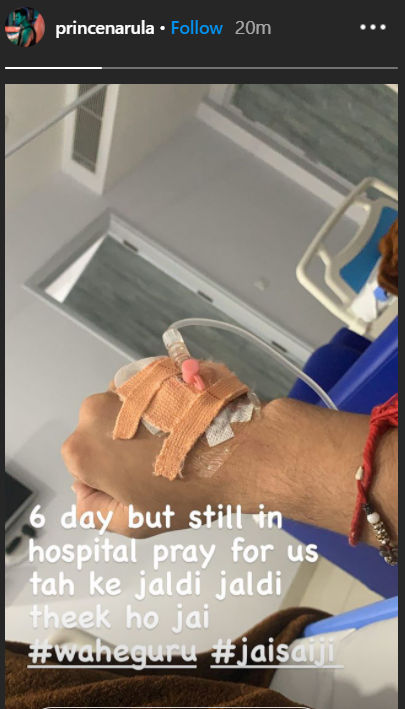 This year, Yuvika Chaudhary and Prince Narula celebrated their special day at home. Sharing glimpses of the same, Yuvika wrote, 'I don't have words thank you, each and every one for your lovely wishes. We didn't celebrate this time because we are diagnosed with dengue.'

Yuvika also added that 'there is no corona'. She mentioned that they will be fine in another few days. 'Blessed to have you all. Happy anniversary my partner in crime,' she concluded. Yuvika Chaudhary and Prince Narula met during their stint in the reality show. In 2018, Prince made it official on Instagram and announced their engagement with an adorable pic. The duo got hitched in October 2018 and pictures from the same went immensely viral in no time.

On October 12, Prince Narula took to Instagram and penned a lengthy heartfelt note for his beloved wife. Prince mentioned that 'he has never seen a soul which is more beautiful than Yuvika's'. He called himself 'lucky' to have her as his wife and also penned that her 'smile is everything to him'. He also went on to call their love story a 'film'.

Yuvika on other hand took a trip down the memory lane and posted a video that featured various snippets from their wedding, Haldi and reception. She too expressed her love for her husband by penning a heartwarming note. Fans in huge numbers extended their warm wishes for the duo. Take a look at the video shared by Yuvika.

Every love story is special, unique and beautiful—but ours is my favourite. When a love is true, there is no ending. I hope we get to celebrate for many years to come. Happy anniversary! Edit by @epicstories.in