Robert Irwin, a 16-year-old Australian Television personality and a wildlife photographer, has recreated his late father Steve’s iconic photograph holding a Koala. Dressed in his uniform from the Australian zoo, Robert poses doing a double of his dad’s pose, cuddling a koala and leaning his head against the animal’s fur leaving his audience on Instagram shocked at how much he resembled his father.

The Australian zoo had shared the original photograph of Crocodile Hunter dad Steve back in January, while the authorities were discussing their efforts to save the injured koalas during the Australian bushfire crisis, state reports. Robert’s father had made immense contributions towards wildlife by opening the Australian zoo wildlife hospital for the survivor animals in the bushfire.

Robert told the reporters that it was definitely a major ongoing issue that his father had deeply connected with and the family has been trying to do their best to help in any way they can. But it's a pretty tough situation, he added, the family was absolutely heartbroken.

Terri Irwin, the wife of late Steve Irwin, explained to the reporters why the fires had such a devastating impact on the country's koala population. She said that a koala's instinct is to go atop a tree considering safety is in the top. However in this case, it worked against them as there’s a hot fire up there. She said that eucalyptus trees have so much oil in their leaves that they ignite and explode. Therefore, treating the injured koalas was tough and challenging because they're basically incinerated, which was heart-breaking.

Users admired at how both looked so alike

Robert told the media that the fires had harmed animals in a variety of different ways, and they were seeing all kinds of different injuries such as smoke inhalation and burns that happened mainly because animals escaped into areas that were scorching in fires.

Instagram users appreciated Robert continuing his father's legacy with his love and concern for Australian wildlife and Koalas. Users admired at how both looked so alike in not just the looks but the thought process. 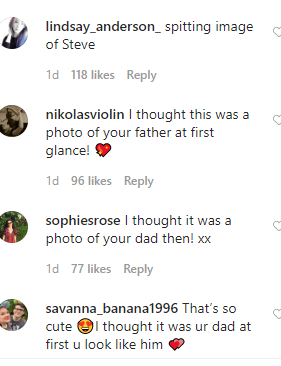 (With Inputs from Agencies)