Sana Khan confirmed all the reports of her breakup with former boyfriend Melvin Louis. She recently lashes out at Melvin on her Instagram stories; see pics

Sana Khan and Melvin Louis' breakup was making headlines for quite a long time. It was only recently that Sana openly spoke about her breakup with choreographer Melvin Louis which shocked their fans to the core.

The actor has accused Melvin of cheating on her with another girl in an interview with a daily. Recently, after Melvin uploaded a cryptic post on social media, Sana lost her calm and went on to post several revealing screenshots which took the internet by storm.

The Wajah Tum Ho actor made a shocking revelation after she confirmed all the reports of her breakup with former boyfriend and famous choreographer Melvin Louis. In an interview with a leading daily, she called Melvin a compulsive liar and a cheater who cheated on her with multiple girls since May/June which she later discovered. Recently, after Melvin uploaded a cryptic post on social media, Khan lost her calm and lashed out at Melvin on her Instagram stories.

Sana took to Instagram to share a streak screenshots of some personal conversations which she had with a person who told her about Melvin and a girl that he is in contact with. Although the person did not disclose the girl’s name but shed some light on how they met and used to chat with each other on WhatsApp. Check out the screenshots below: 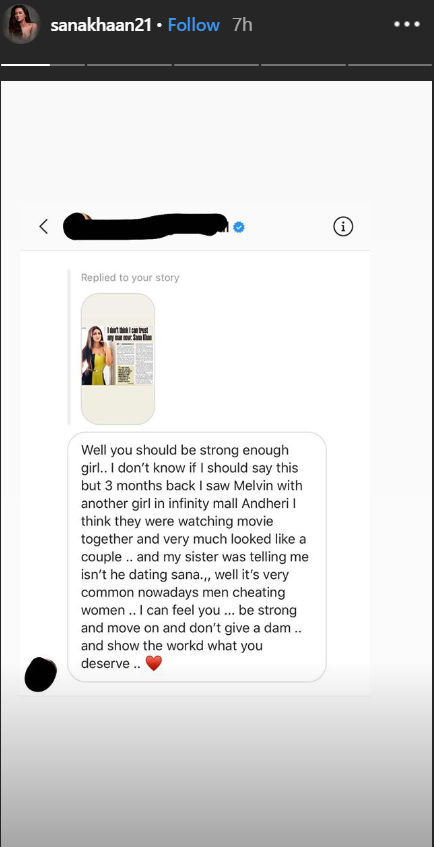 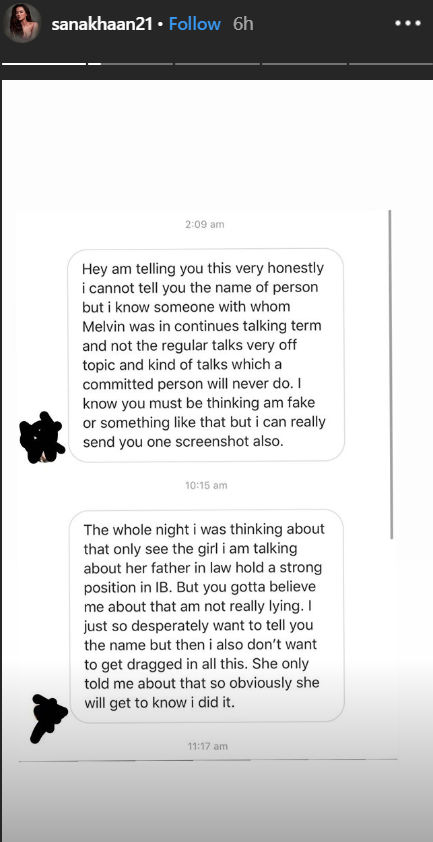 In the interview, Sana also spoke about how determined she is to move on, and also said that she was nursing a broken heart. She also admitted that she wanted to get married to Melvin but this incident has left her broken and that she cannot trust any man henceforth. Sana and Melvin made their relationship official in April 2019, and also admitted to being in a serious relationship.